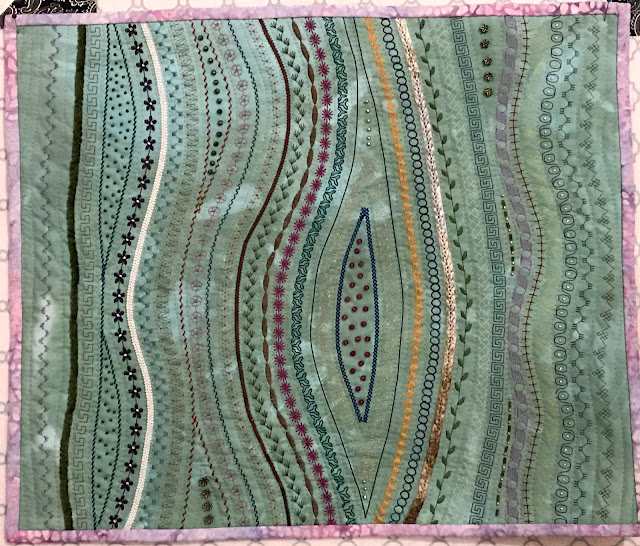 Hello friends!  Well, guess what I've been up to.  Ding, ding, ding, correct!  Stitching.  If you guessed plumbing, well, you were wrong.  You're cute, but you're wrong!  I was hooked into Craftsy again and took the Stupendous Stitching class.  Lots of fun and very simple.  Afterward, I did wonder why I had to take a class on something so elemental but whatever.  I'm claiming this to be March's new project for 6 and 6 in 2018 with Pomegranate and Chintz. 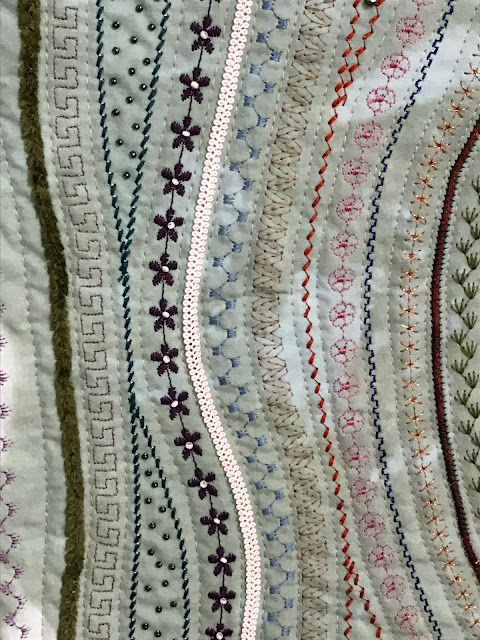 I chose one of my first hand dyed fabrics from a few years ago that I didn't love, for the background.  Basically, you just choose different machine stitches with different threads until you fill a fat quarter.  The lines were supposed to weave back and forth to make interesting sections. 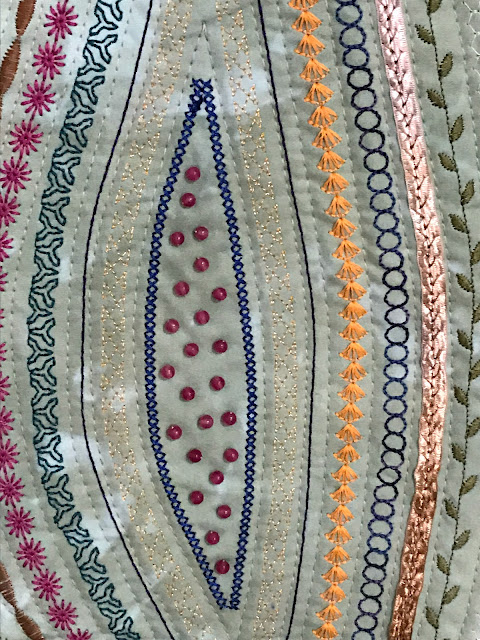 I couched some ribbons, used metallics, added beads and voila.  I love it up close up but I feel like from a distance, it's not very interesting.  I think I'll do another one with a white or black background.  I think the threads will have more impact.  It was a fun afternoon project.  If you're looking for a quick project I recommend it.  It was also really nice to become more aware of what my machine is capable of.  Embroidery that's easy on the carpel tunnel is also nice. 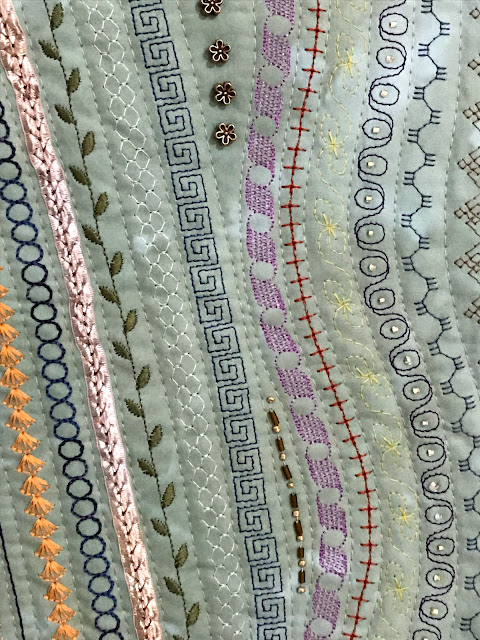 Before the beading, I quilted between the rows.  Somehow, I got an applique pattern caught underneath... it took me 8 rows before I realized I was quilting over paper... I feel like such a bright shining star some days...  I also used a hand dyed for the backer.  It's that vintage rose piece that I wasn't crazy about. 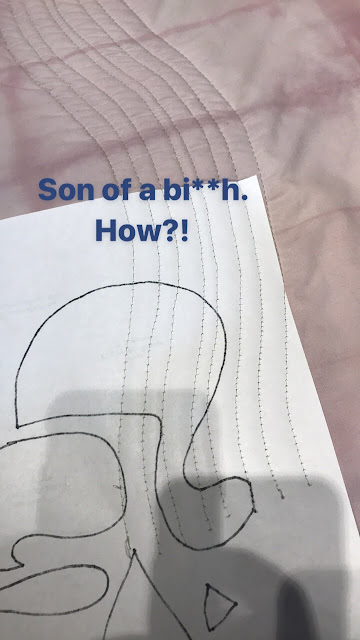 Speaking of bright and shining.  I had to replace my sink faucet and accidentally got one that shoots laser beams!  Just kidding.  It's got an LED light that makes the water glow.  I have NO idea, why anyone would need that feature.  I guess, if I wanted to get a drink in the middle of the night but didn't want to turn a light on first?  Definitely a first world thing.  The good news is that it has a tall neck and I can now get my spritzer bottle under the tap in my studio!  Again, first world issues.  #blessed  No picture, but Rich put in the UtiliTub in the basement and a light fixture directly above. It made him cranky.  He called it the portal to hell.  Such a grouchy pants.  What's important here is that my dye station is fully operational! 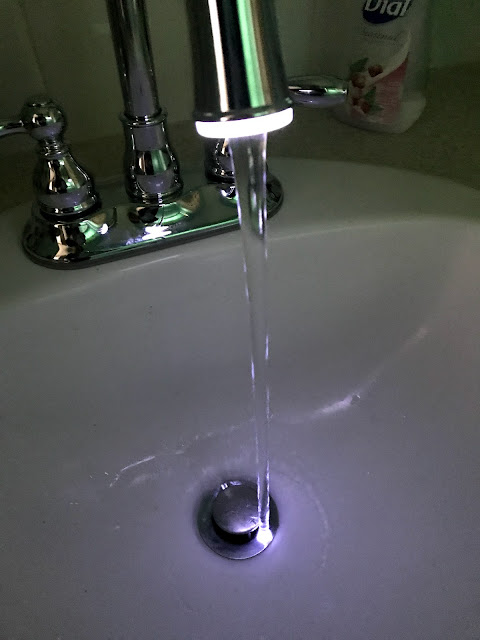 This happened!  So, here's the story.  Last month they went to Norway and Hunter's plan was to propose under the Northern Lights but the day before the excursion, he broke his leg while skiing.  Had to be rushed home and yada yada yada, the proposal got postponed.  So, he rented a local theatre for an hour, had them play the Northern Lights and asked Carmen to marry him.  Yeah!  There's going to a wedding!  Now to start my campaign to be their wedding cake baker.  There are Craftsy classes for that!  Maybe I should find out how big the wedding's going to be before I attack that... I'll do some grilling when they come to dinner Sunday.  Incidentally, he fell in the shower yesterday and we spent the evening in the ER getting his cast sawed off.  He's fine, fairly bruised up but at least he didn't mess up the healing process.  Oi!  These kids will be the death of me. 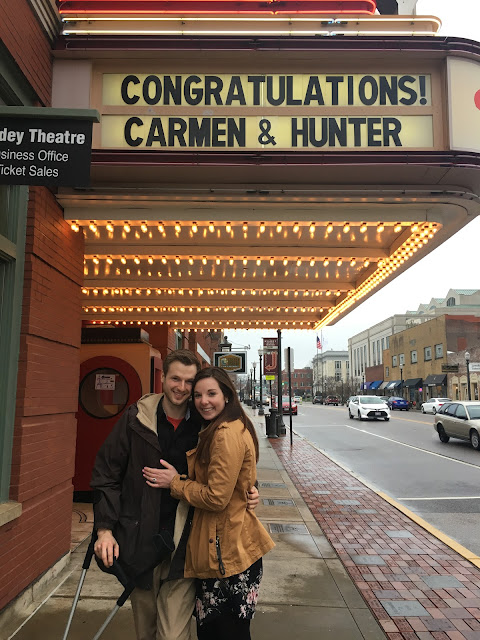 In other news, I'm mostly caught up on Simple Folks applique blocks.  This one is just missing a few of the dots above the tulip. 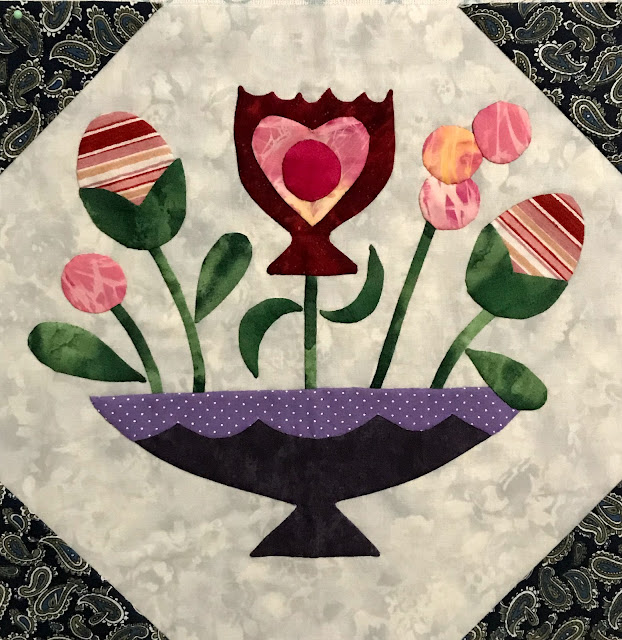 The swans need dots and eyeballs. 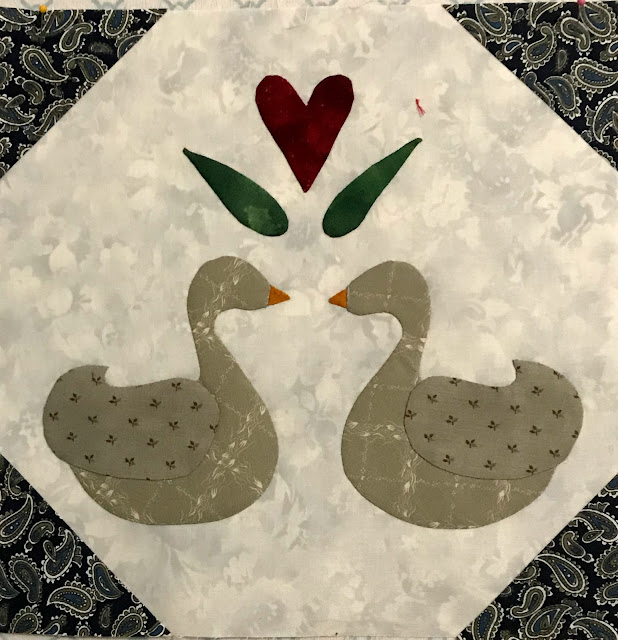 There's a few other things going on but I'll save if for another day.  Hope everyone has a fantastic Easter!
Posted by Heather at 7:59 AM