I thought I'd do a quick blog post while my list of things to talk about is still reasonable.  Luckily, Rich woke me up at 4:30 this morning as he was running out the door, late for work.  (Insert major eye roll here.  I think I can see my brain.)  So, I have plenty of extra time before I head to work this morning.

Our block of the month this time was a petunia.  Now, petunias are one of my least favorite flowers.  They smell really funky.  It's not that they aren't pretty because, they are.  They just smell bad.  So, I'm not going to judge this one too harshly.  It's fabric and doesn't smell but it's still a petunia and I admit that I'm prejudiced against it on principle.  At least I'm honest.

I know I have PLENTY of things that need to be finished before I start something new.  And, yes, Christmas is right around the corner.  I know, I know, those gifts aren't going to make themselves.  But, LLOOOOOKKKKK,  how cute my new project is!!!!  It's Bertie's Year, block of the month.  Vicki R. lent me her pattern and Dana D. very generously let me steal a TON of wool scraps.  So, far the plan is to make  one calendar quilt.  Each month will be a different colored outer border.  We'll have to see them to together, all finished, before I decide for sure.  This is January.

And, this is February.  You can see why I might be concerned by putting red and violet next to each other in a quilt.  But, who knows?  I could be awesome.  Each month's color theme will be directly related to the wool I have available...

So, last month I mentioned my afghan that took a month to make and I forgot to take a picture.  Well, here it is.  Even uglier than I remembered.  It also didn't do well at the auction.  I can see why.  My pincushion last year, brought in more and that took an evening to make.  I'll have to think a little before next years's auction.  On the up note, I had donated some dinosaur applique blocks and fabric that some of the ladies made into a kid's quilt that did bring in a decent amount.  That took a little sting out of my night.  Oh, and the class I gave was WAY more fun than I expected.  I didn't make a COMPLETE fool of myself... I don't think.  I've even heard from a few attendees that they've given it a try and enjoyed themselves.  Color me happy!

I almost forgot to show you how the churn dash baby quilt is coming along.  I love it so much!  There was supposed to be a strip of applique between the 2nd and 3rd columns and another row of blocks but I decided I liked it like this.  It was going to be enormous if I'd done it all and this is intended for a toddler to love and carry around.  Besides, it's so sweet the way it is.  I've decided in this case, less is more!  A very sweet traditional quilt for a sweet little girl that's been named after her grandmothers. 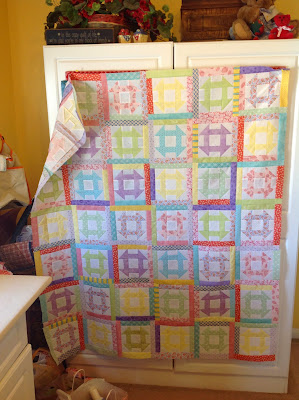 Next up, Christmas presents.  I swear!
Posted by Heather at 6:10 AM 2 comments: