Recently, I met with friends at Todd Hall Retreat Center and sewed all day.  What a lovely day that was!  It was fabulous to have no one to answer to for a whole day.  The stuff really hit the fan when I got home, but while I was there, it was magical.  Let's just say that the adolescent brain just doesn't work at full capacity all the time and leave it at that...  Someday, I'll be able to leave my house for an overnight retreat.  Now is not that time.  I think I've got another 5 years before I'm all clear.

Any who, I was finally able to quilt Hunter's graduation quilt!  And, only 2 years late.  My friends are so supportive.  I got a lot of  "Hey, it's still the same decade" and "If he isn't married yet, you're still good."  Quilters are good people, I tell ya.  One of my favorites was "Oh, I like the hoochie girl."  To which my neighbor replied, "Oh, you haven't met Heather yet?"  Haha!

I started at a center point and spiraled out at about  2" inch intervals.  I don't have a guide on my Walking Foot.  So, I jerry rigged a paper clip to be my guide.  I'm pretty happy with the outcome.  It's not bad for something his momma made him.

Do you remember this project?  I did the second border a few months ago as part of the Round Robin.  (The pink and purple 4 squares)  One of the Cindy Hagen was working on her border (the last 3 strips) and I thought it was fun to see what everybody else had done so far.  The fish are hand appliqued, broiderie perse style.  No one stuck with the pink and purple like I had hoped but you win some and you lose some.  Know what I'm saying?  Now, I'm looking forward to seeing mine.  And, for the whole thing to be over.  It's stressing me out some.

So, then I decided I would show Cindy the work I did on her Round Robin from a few months ago.  You know how people don't want to insult you, so they just nod their head and make non-committal noises?  Yep.  That happened.  Very humbling. 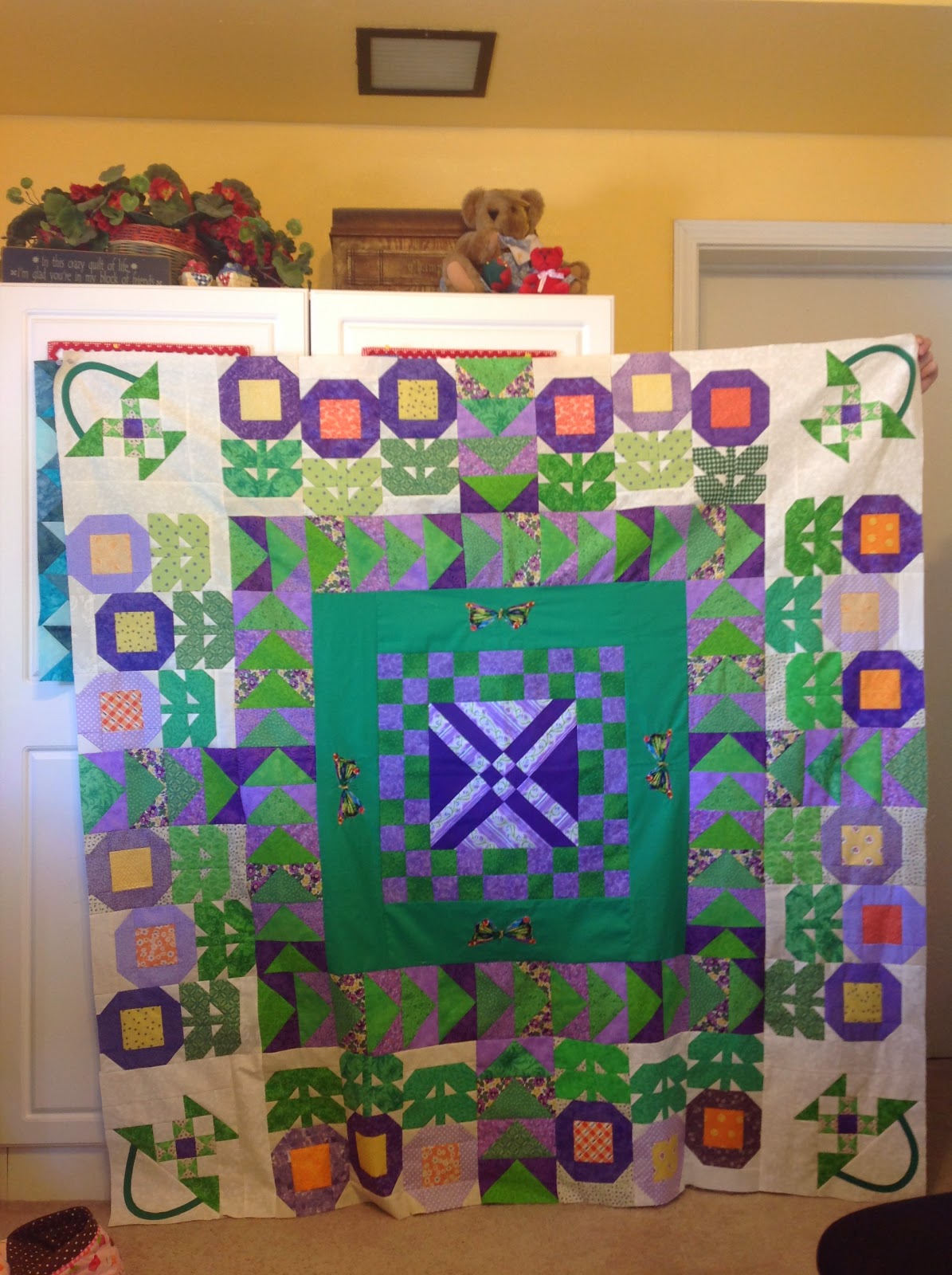 I almost forgot to mention this one or maybe at this point I'm just afraid to admit it was me...  I decided I just HAD to piece these posies.  The border had to have Ohio Stars so, I put them in the baskets.  I wish I'd taken a close up of them because it's defineatly the best part.  The posy pattern was originally 2x4" so, first I had do the math to get it 6x12".  That took a week.  Then, making all the posies...  phew.  I was so done with it!  I'm not that impressed with them after all that trouble.  The flying geese were left overs from the previous person.  And, did I mention nothing was square to begin with?  It was SO hard to fit everything in properly.  Done. With. It.

Right before driving down to Todd Hall, Vicki and I went to Jackman's Fabrics.  We had coupons burning holes in our pockets.  Naturally, we ran into several friends with the same problem.  It was a mini Hearts n' Hands reunion.  I settled on some fabrics to finish off the Strawberry Social quilt from a year ago and was pretty excited.  At the retreat, I had a thicker green border on it but was disappointed with my choices.  Joan suggested making it smaller.  I cut an inch off and it made all the difference!  Good people, I tell ya!

Look what else I worked on!  It's been forever.  I had all of the plates done and the centers needed to be sewn down.  Last time I worked on it, I melted my center template, and there it sat.  Forever.  I just could not make myself do them again.  So glad I got to it, though.  I'm liking the end results so far.  I think I'll be setting them with black.  Linda suggested a black and white piano key border that would look amazing.  But, then I was like, "dang, that's a lot more piecing."  So, we'll have to see what happens in the end.  Maybe, I can find a black and white striped border...

I have the next 2 days off and then another retreat next weekend.  So, looking forward to it!  I love clearing things off my to do list.  You know how it ends up going.  Finish one, start two.  I just have to figure out what's next.

A New Project, A New Due Date

I did start a new project even though I was waiting to finish a few others first.  There's a new baby coming in less than a month and I want have this done when I go visit.  There's nothing like a due date to get the lead out.

This will be baby #3 for them and so far, I've kept with an animal theme.  I'm doing machine applique because I wanted it to be somewhat sturdy if they ever decide to use it.  They haven't on the others but I think they're running out of space on the nursery walls, so you never know.


The original pattern shows regular colored cats and dogs.  I kept channeling Blue's Clues and decided my pets would be rainbow.  They're first baby quilt was rainbow zoo animals.  It seemed fitting.  I'm pretty happy with them so far, just imagine them with eyes, it'll be less creepy.  I also need to shop for some thread colors.  Oh, darn.  I hate shopping.

Well, I was able to enlarge the photos when I started but it stopped working.  ***heavy sigh***  Thank goodness, I just complained about that.  It's working again.  I'm not taking this paragraph out, just to make sure I don' ruin the mojo...


This is the latest Guild Challenge block.  I'm loving the 20's feel of it.  I had to go with an intense, patterned yellow or it would have drown on the beige background.  Kinda love the funk it's got going on.

These are the companion/ inspiration fabrics that are going with the project.  Don't confuse this with an actual plan.  I have no idea how I'm going to fit the chevrons and rainbow thingies together to make something pretty.  I got a sneak peak of the next one and it's equally as cute.  The next flowers are going to be blue.

Yep, I'm still obsessed with embroidered pillow cases.  It's ridiculous because I know we're going to stain them in no time.  Just like my vintage ones.  But, I can't help it.  I love them.  If you're wondering, boiling them in water with 1 cup of backing soda and 1/4 cup salt for 3 days did really well at getting rid of some of the stains.  The blood/ chocolate stains remained but everything else came out.  I wanted to try longer but Rich got pissy about having sheets on the stove for so long.

I finished these.  And, I just noticed that I screwed them up!  Notice the daisy type flowers on the left.  On the first one, I filled in the petals and on the the second one I filled in the centers.  Ugh!  I don't know what to do now.  Do I give these as the gift they were intended as?  Do I keep these and do another set to give away?  I'm torn.  Rich and Bethany say to give them because I had to point out what was wrong or they wouldn't have figured it out.  Also, Rich knows me well,  he told me to claim that I did it on purpose...It's a design element.

We're 3/4 the way done with Quilty Stitches.  I think I've decided to frame it.  I researched how to stretch it for framing and I think I can get a square frame for about $30 online.  I'm feeling cocky after doing the doily last month.  I'll keep you updated.

I should have lots to show at the end of the month.  I've been invited to 2, count them 2 quilt retreats at the end of July.  I'm super excited!  The first one I'm just staying for 1 day and the next week, I'll be there for 2.  Now, to figure out what I want to accomplish when I'm there.
Posted by Heather at 8:38 PM 2 comments:

I've been so lazy!  I'm not sure what my problem is but honestly, I have no motivation at all to do anything.  I did get about 20 loads of laundry done this weekend and that was no fun at all!  But the good news is that I'll have clean clothes to wear to work this week.  I'll be honest, it got pretty dicey at the end of last week.

Our guild is doing an applique block of the month this year.  It's going to be fun, I think.  It took me a month to figure out what style I was going to do it in.  I finally settled on an Art Deco feel.  I found some great clam shell fabric in teals and a great outer border with peach and teals. Pretty exciting stuff.  I'm pretty sure the patterns were from the 20's.

I did manage to get a Christmas block done.  Now that I'm looking at the corner detail, I realize I have a rogue thread to tuck in before I finish it up.  Eventually, I'm going to drape the tree with pearl garland.  I'll get to it, EVENTUALLY!  That's a reference to a kids show from the 90s.  There was a super hero family of procrastinators.  They were always going to get to it, EVENTUALLY! 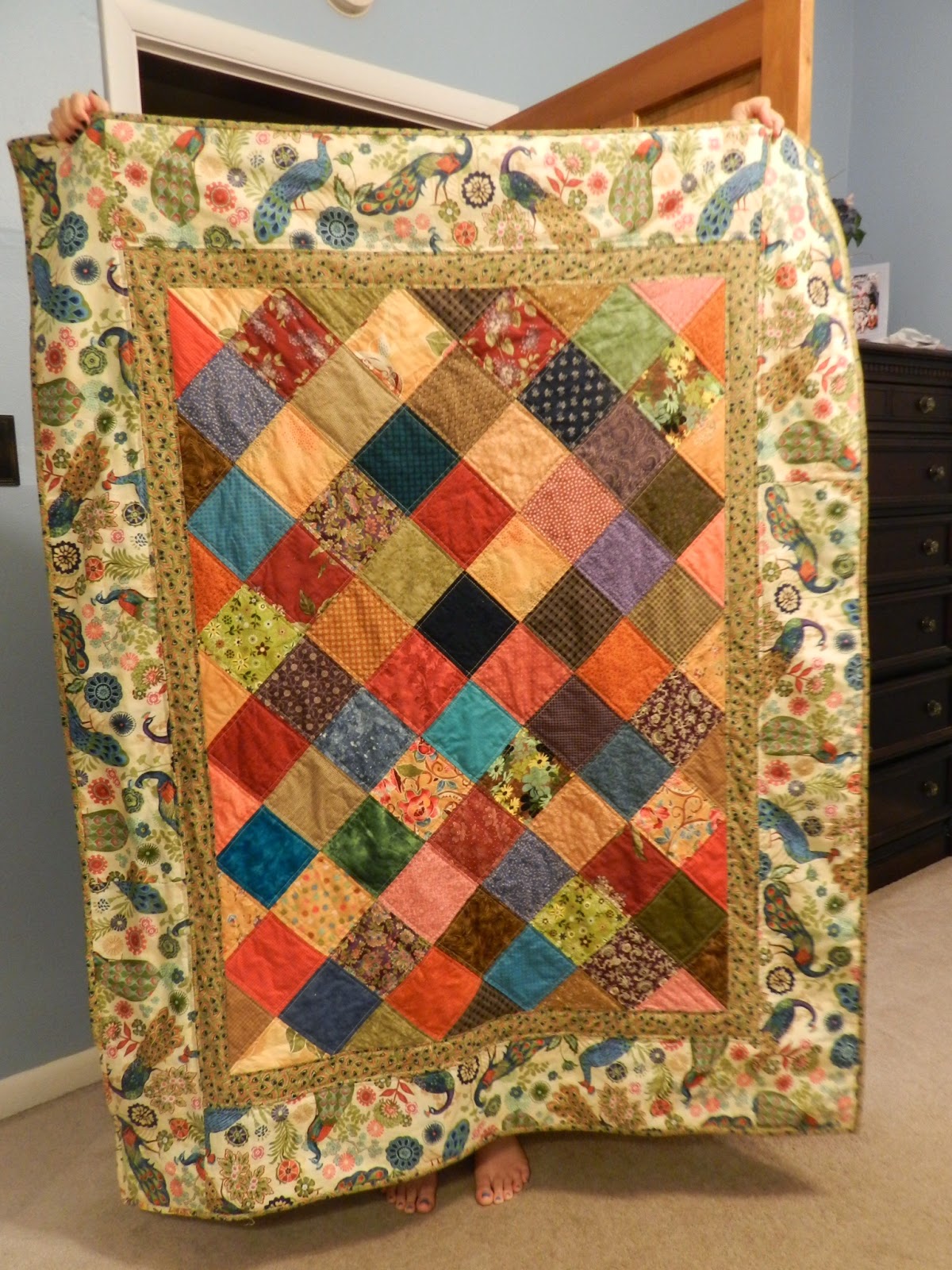 Here's something else, I finally got around to doing!  I did this quilt top as a Super Bowl Mystery 2 years ago.  The top has been sitting in a pile of tops for 2 1/2 years.  I quilted a simple 1/4 inch on either side of the seam and it took no time at all to finish.  Why wait so long?  I can't tell you. 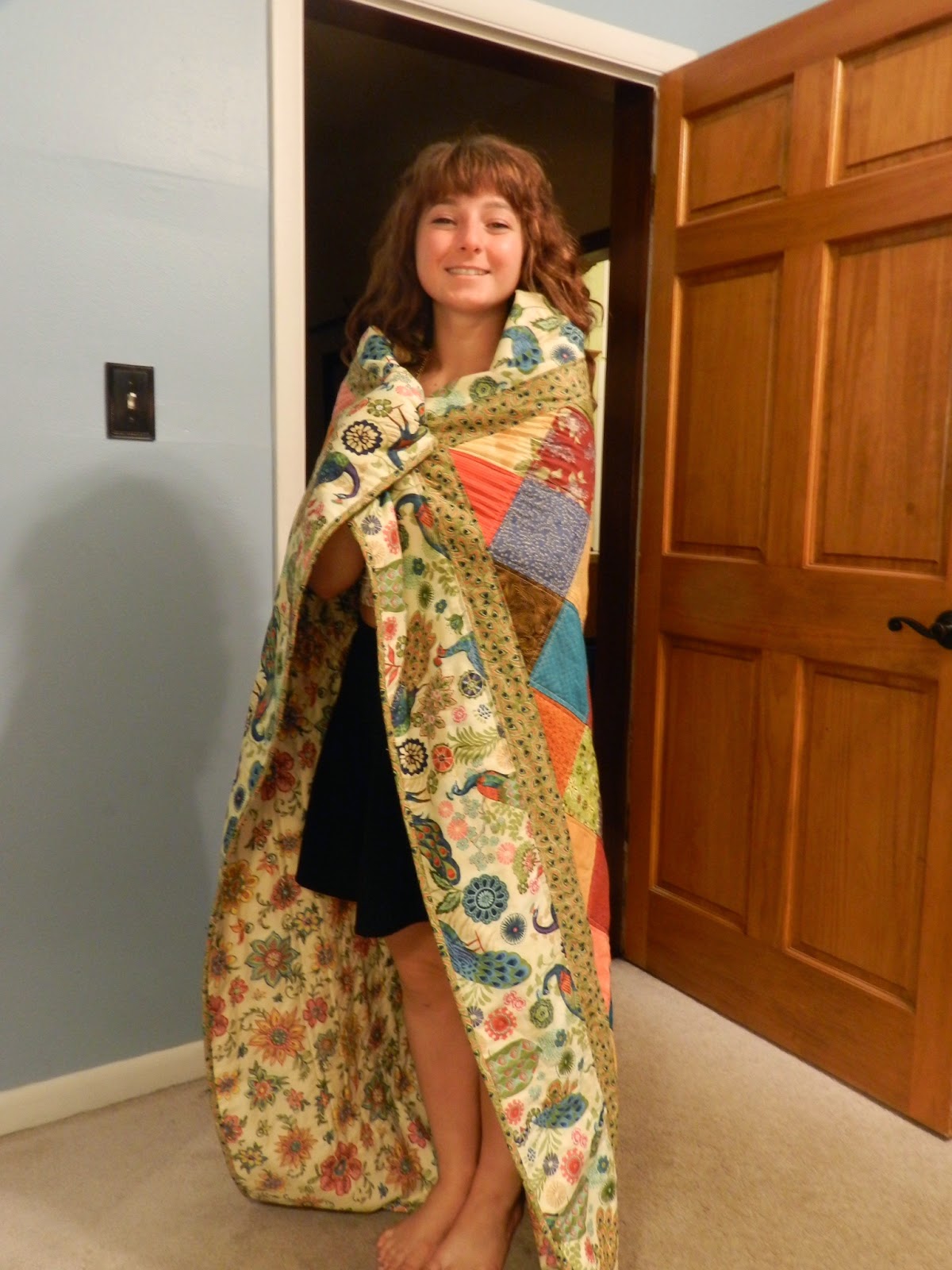 And, go me for finally figuring out how to make the pictures bigger in my iPad!