I'll Get Around To It, Eventually!

Look what I found when I brought my Grandma's Hope Chest up from the basement last month.  This old crewel work that I started forever ago!  2002!  It was mostly finished but I had run out of a color and wasn't confident enough to move on with what I did have.  It's one of those cheaters.  The background is painted for you and you fill in the blank spots.  It's good to see how my stitching has improved.  Dang, the back is a mess!  Not sure what to do with it now that it's done.  I may frame it and put it up next to it's cross stitched cousin. 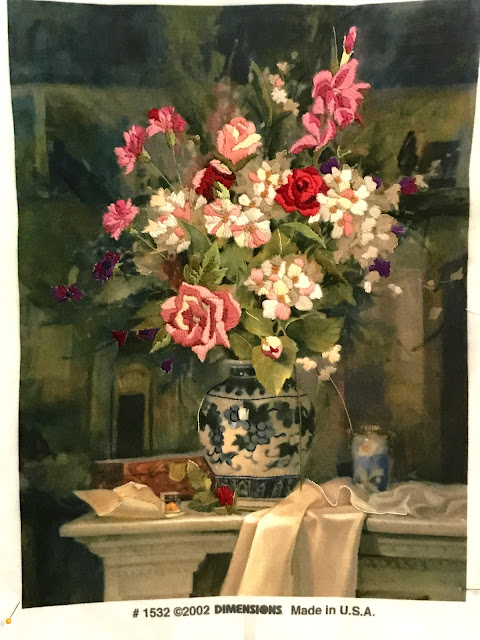 I was able to vend 2 weekends in a row.  Rich even came with me to Crest View so we could spend the weekend together.  You know those  men that follow their ladies around the mall, waiting patiently, entertaining themselves with their phones.  That's not my husband.  He was on his best behavior and I loved that he did all the heavy lifting.  But, in the end, we both decided he didn't need to come with me again...  I really hope he's more agreeable when I want to travel for fun, dang it!  Or, I'll just have to go alone! 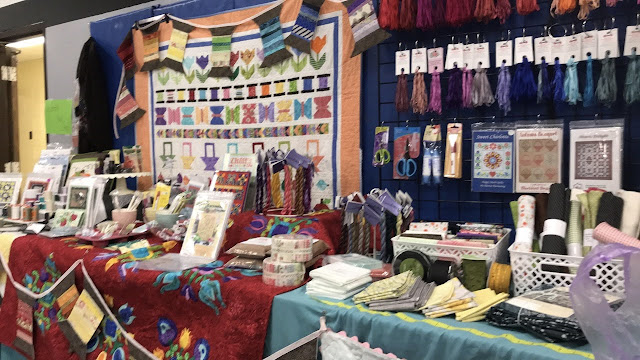 In between shows, I've been addicted to Craftsy Unlimited.  I took the fabric dying class.  Dana D. gifted me with her Procion dyes when I started dying my silk ribbon and have always wanted to dye fabric as well.  I finally bought a bolt of ready to dye cotton and did some experimenting.  There's room for improvement.  This first one was called Storm Cloud. 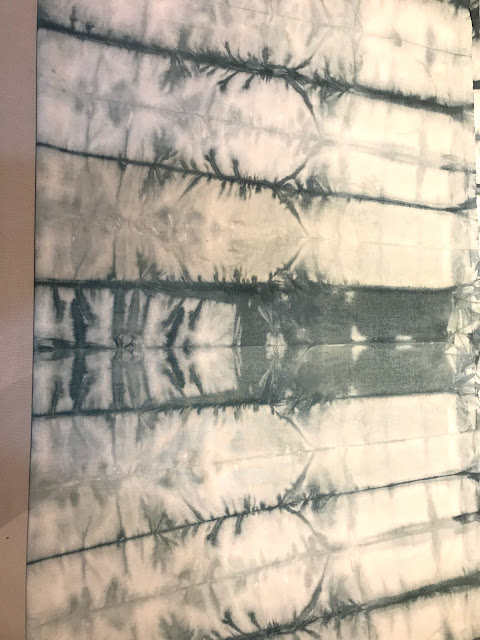 This is Scottish Kilt, it's kind of a teal green. 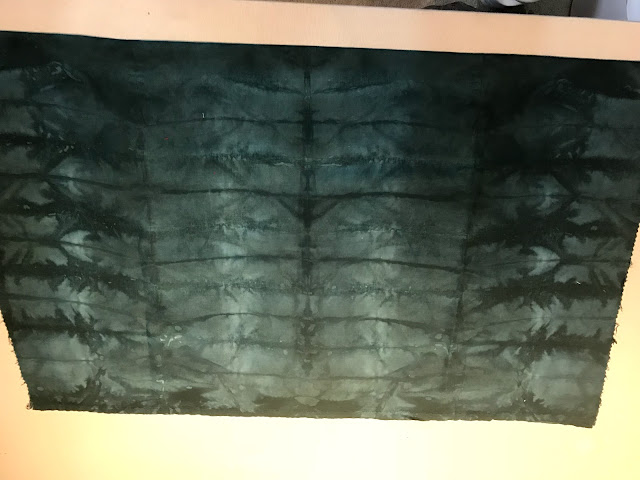 This was Camel, if you can believe that!  I expected a tan but got green instead. 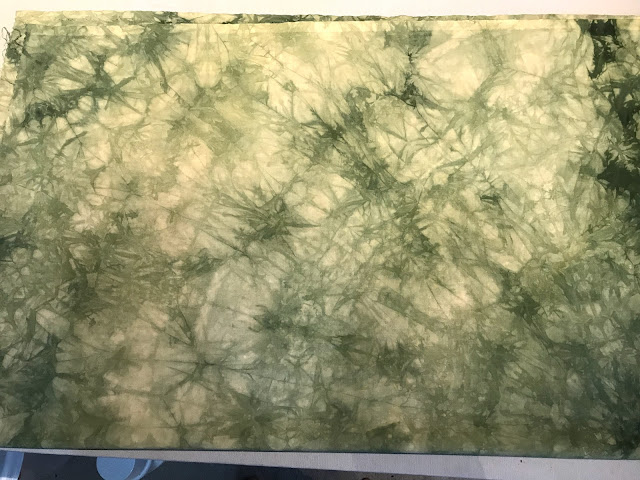 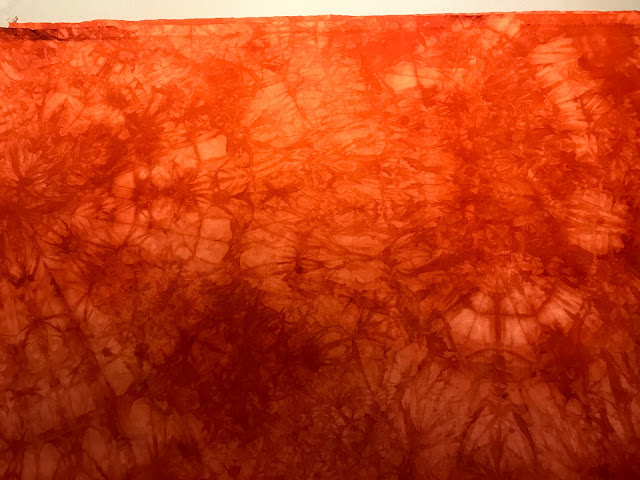 I didn't mix the dye well in the Mixing Red but the colors are fantastic.  Rinsing this one out was a real BI**H!  She mentions in the class that if you use too much dye, the rinsing part will be a bear.  Apparently, I used too much for all of them but especially this red... 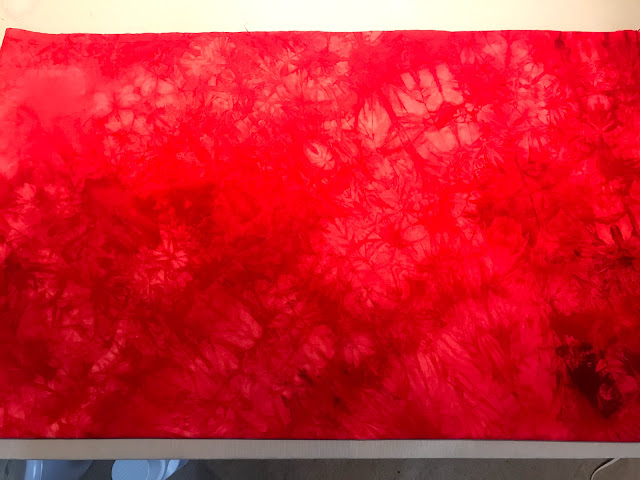 This was Vintage Rose and it's just sad.  I think I'll over dye it with something else.  I also decided I don't love the effect of the folding.  For quilting purposes, the scrunchy method has more flexibility.  Then I decided I wanted to put a utility sink in the basement so that I can have a dedicated dyeing station.   So that's purchased but not installed.  There is already a completely pointless shower plumbed in.  Why?  I could never decide.  It's not a finished basement.  It's a gross, 150 year old basement with a shower...  It's weird.  Now, it'll have a purpose.  Well, when Rich re-plumbs it for my sink, anyways. 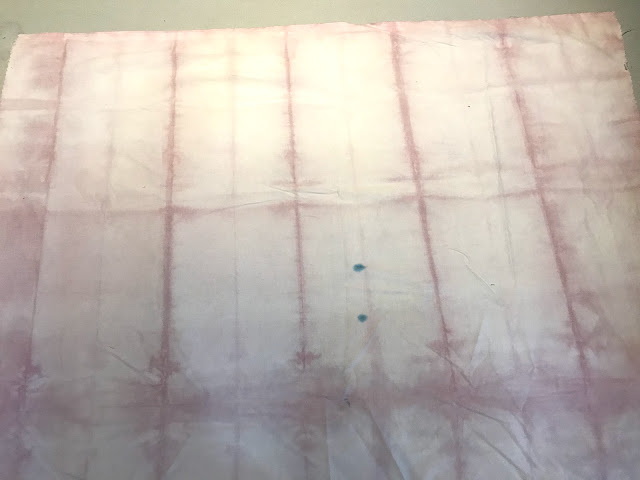 One of the first Craftsy classes that I ever took was Pictorial Quilting Techniques with Wendy Butler Burns.  I had taken this photo of a flamingo at the St. Louis Zoo and always knew I wanted to turn it into a quilt.  I had it blown up but then set it aside for another day.  Then, I watched The Quilt Show with Melinda Bula and decided it was time.  This is just the skeleton of the project.  I need more fabrics for the grass and I hope to do some thread painting on the water and on the tree.  We'll see how it goes.  I also have a rose and a butterfly that need to become quilts. 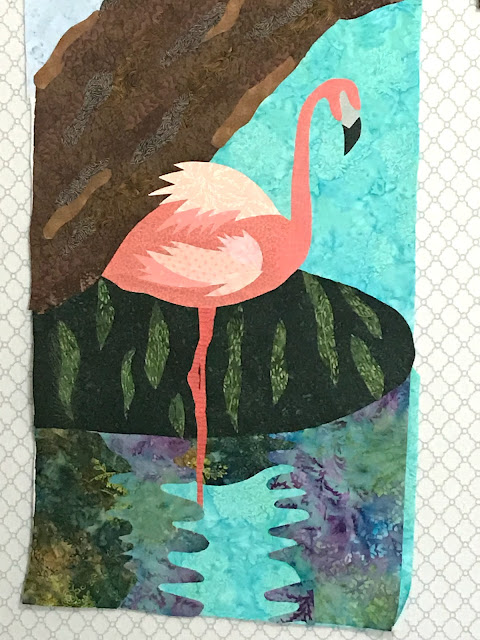 I FINALLY got around to re-doing my dining room chairs.  They were past their prime already when we bought them used.  Then, Rich spilled bbq sauce on his chair back at Christmas.  It was time, it was past time... 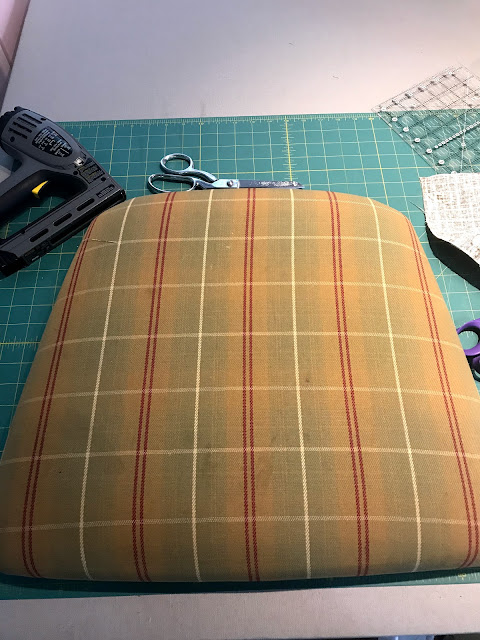 I'm really happy with them.  I was able to get the same fabric that I'd done the valance in.  Now, I have to stop buying floral table clothes.  They look terrible together. 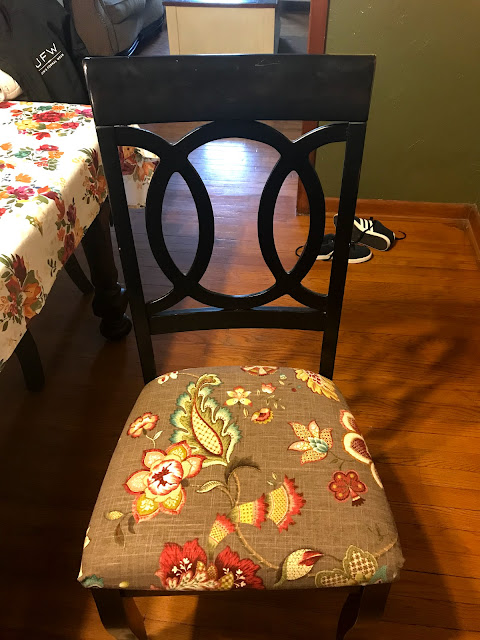 Last but not least, I finished a block from Baltimore Garden.  This took forever.  But, if I'm honest, I wasn't dedicated to it.  It's amazing how much stitching can be done when you're sitting at a quilt show!  Also, people love to watch you do it.  I think I've decided to set this project aside for now.  I've got several BOMs going that I'd like to keep up with.  This can be a long term project. 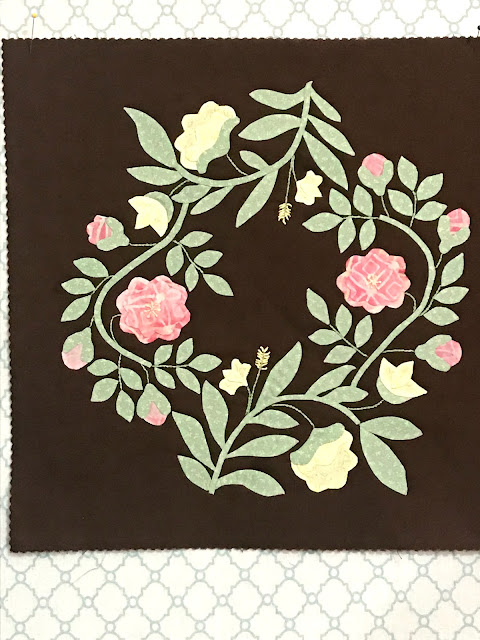 Yesterday was the first day of extended hours for Prom Season.  Boo!  I don't expect to get tons of stitching done but I always have something to work on during breaks.  Keeps me sane-ish.  I'm done with travel/ vending until June for the same reason.  Time to hunker down and get through it but I'll keep in touch.  Happy Stitching!
Posted by Heather at 6:40 AM