Crazy or Boring, You Be the Judge 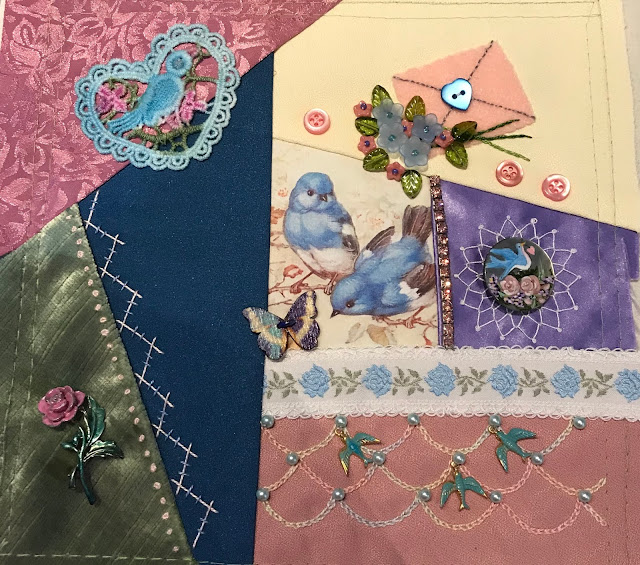 It's been all about crazy quilting for me lately.  I was really into it for a few weeks and then I got to meet some new CQ friends and it sent me over the edge!  So much inspiration!  The rose pin was white when I started, I used Sierra's nail polish to update the color.  One of the people I met last week is Nicki Seevey of Raviolee Dreams on Etsy.  I've bought quite a bit of her hand dyed lace over the years and this bird/heart is some of her work.   I also fan-girled pretty hard when I met Lisa Boni of Ivory Blush Roses.  Honestly, I was embarrassing but she was really nice and we spoke for a long time.  She's got such a talent for color and delicacy.  She's doing a YouTube series if you'd like to to check it out.  Search for Ivory Blush Roses, Lisa Boni. 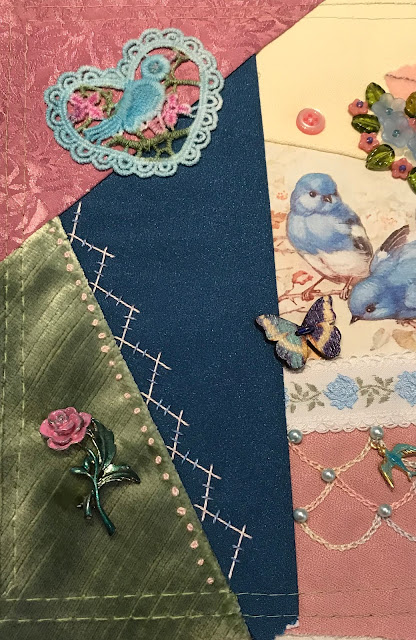 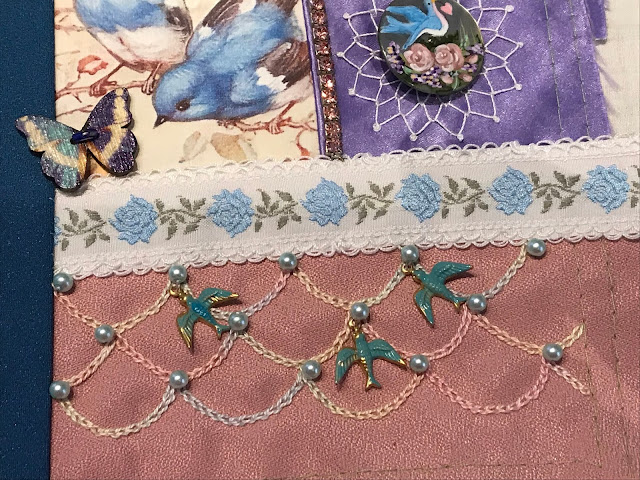 The Eagle block is finished/ not finished.  I added some clear beads to the fireworks, red beads to the flowers.  I painted the do hickey on the left.  It's too stark white, I may have to soften that up a bit.  It's anchored by a woven stitch in red that's really freaking me out now that I'm looking at the picture.  Looks too much like insects/ antennae... ew. 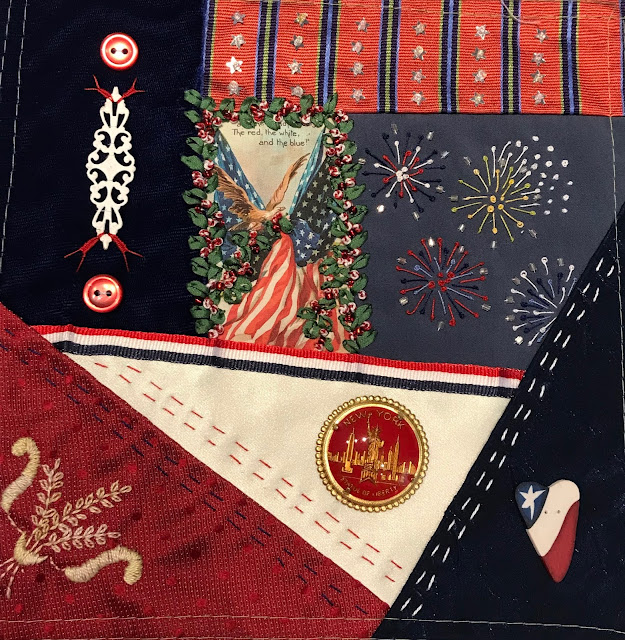 My super cool New York button came in!  It's more of a charm that I cut the loop off of.  Love it!  Then I added some "fields of grain" with the corner embroidery. 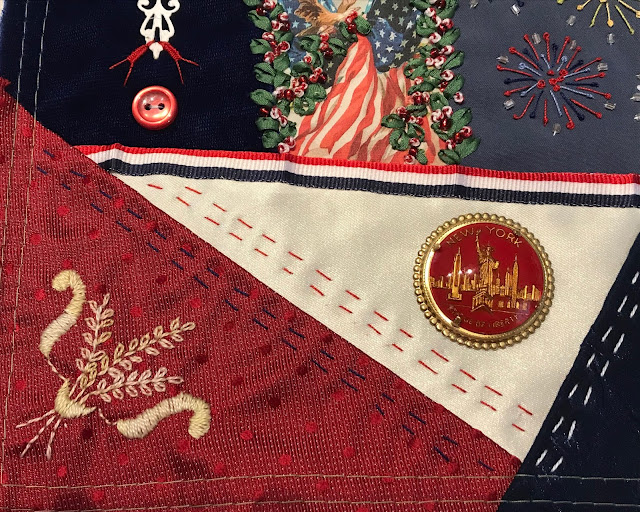 On a side note, last week a co-worker told me I was boring.  I only do boring things like bake and sew.  Also, I was the whitest person he'd ever met.  I WAS PISSED.  Now, re-reading how I fan-girled another grown woman over her embroidery skills, I think I get his meaning.  He still doesn't get to eat my cupcakes, though! 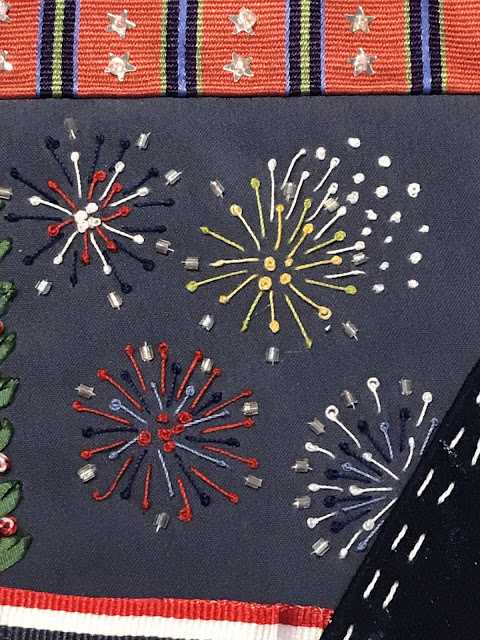 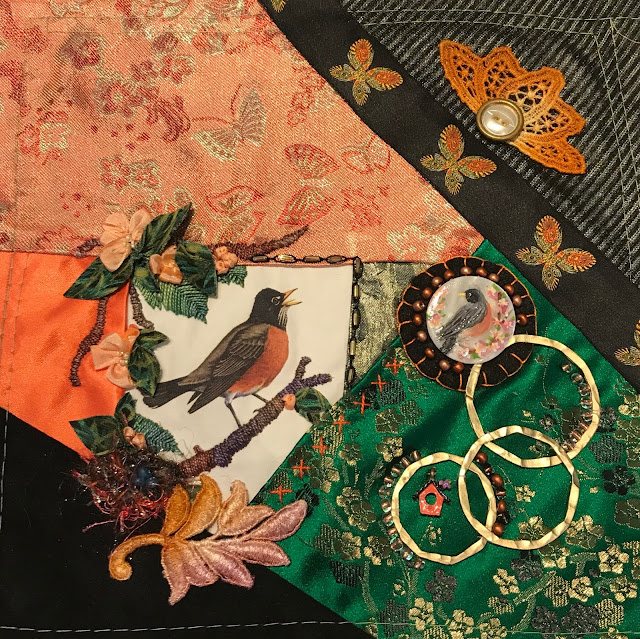 The Robin block is turning out to be a favorite of mine.  I did the ribbon work & branch around the bird.  The lace are from Nicki's shop and the Robin button is also from Gerry. 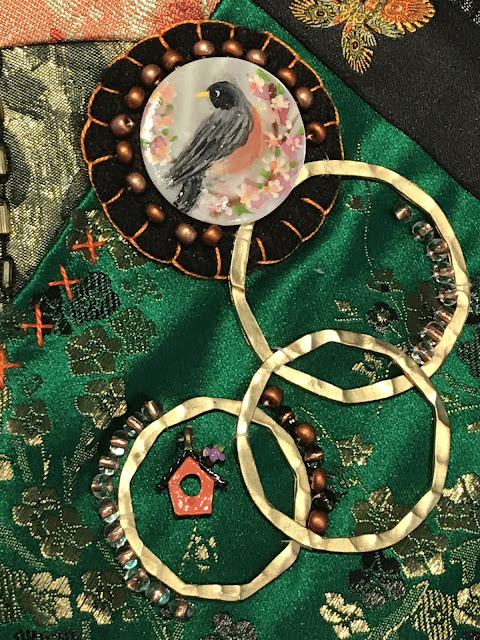 A simple linked chain and bugle bead for the open side of the picture.  The 3D leaves are 2 pieces of fabric fused together with Steam a Seam and tacked on. 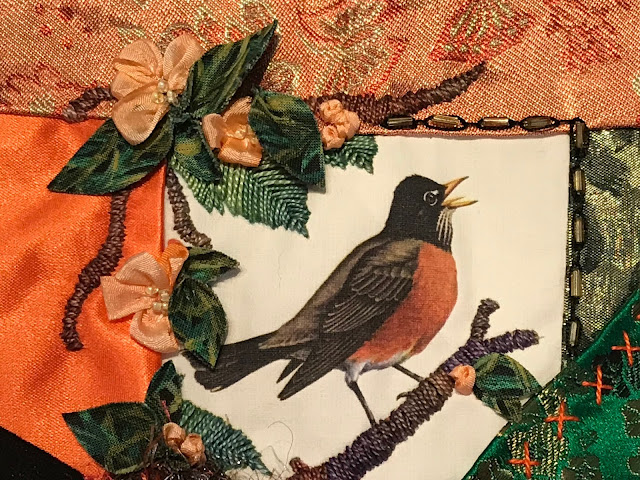 Not much has happened with the peacock.  Everything I get is too large!  I did find this perfect little locket from the same shop New York came from!  The lace is also Nicki. 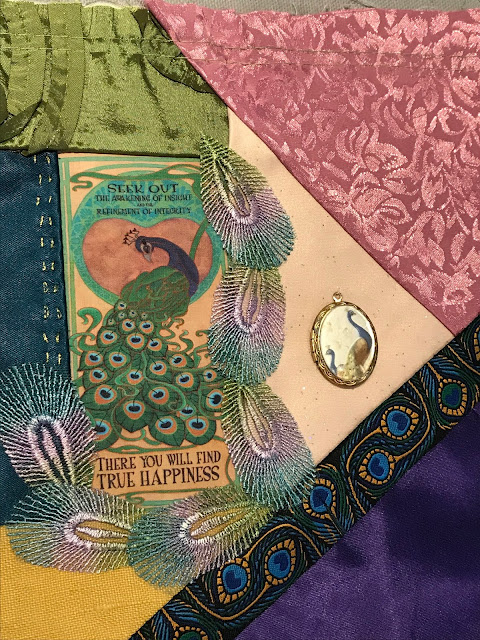 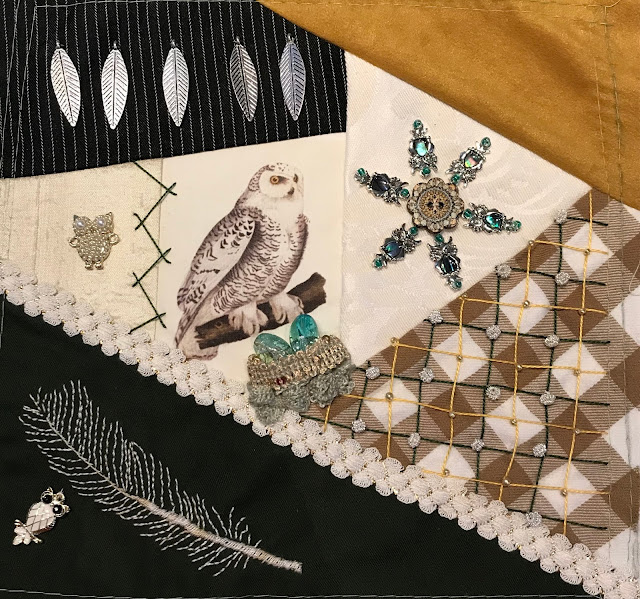 I kind of like the Owl block at this point.  I was really pleased with the owl charm kaleidoscope I  made.  It was really different than my usual.  I've used the feather embroidery before and it's a favorite. 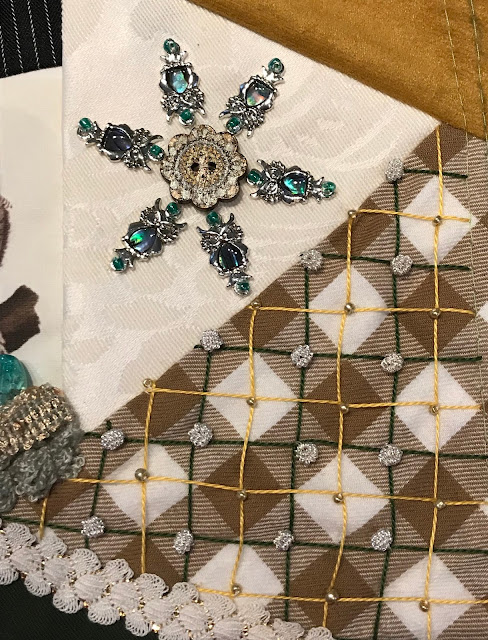 The Hummingbird got some attention as well.  I added the cameo and another one of Gerry's buttons.  I wish I could afford more of her buttons!  Actually, I wish I could paint like that!  Then I did some ribbon work.  I did Colonial Knots with ribbon for the flowers but added a pink seed bead as well.  The trumpet flower doesn't exactly fit in but I had to use it so my bird could have a snack. 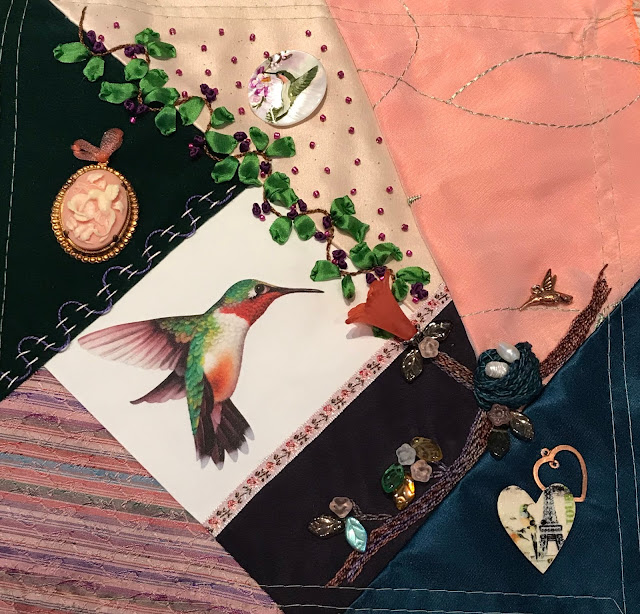 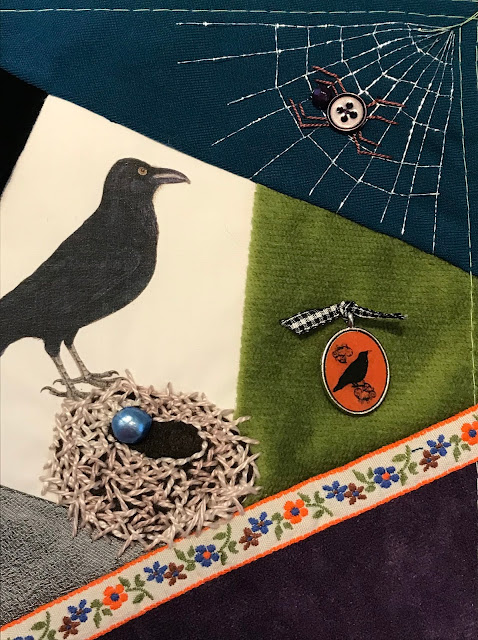 You can't see it very well but I did a button spider in purple.  The crow charm is from a Halloween packet I bought years ago.


The Turkey block is going to be really challenging for me.  So far, it's pumpkins.  But, that's only going to get me so far!  This large one is wool with some gold thread and lucite leaves.  During our last CQ group meeting, we studied Kathy Shaw's latest book.  We talked about building seams.  I used a seam she had listed as inspiration on the boullion stitch pumpkins. 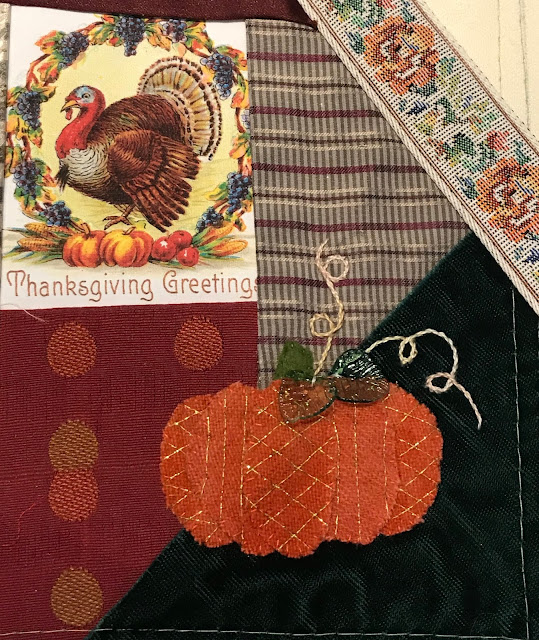 Last but not least, I finished some more displays for Jackmans, just in time to be handed another one to do by August. 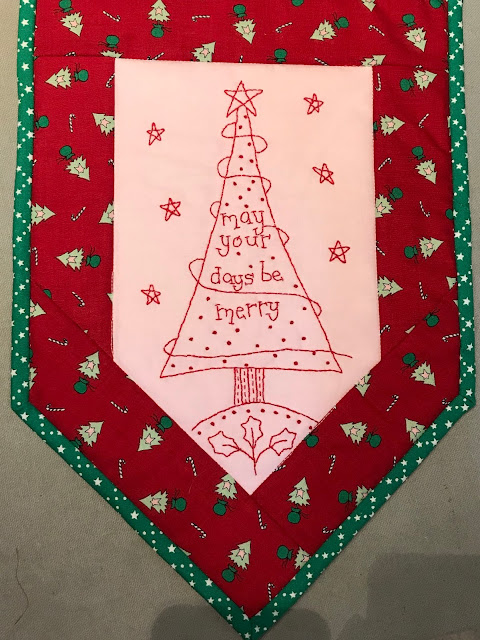 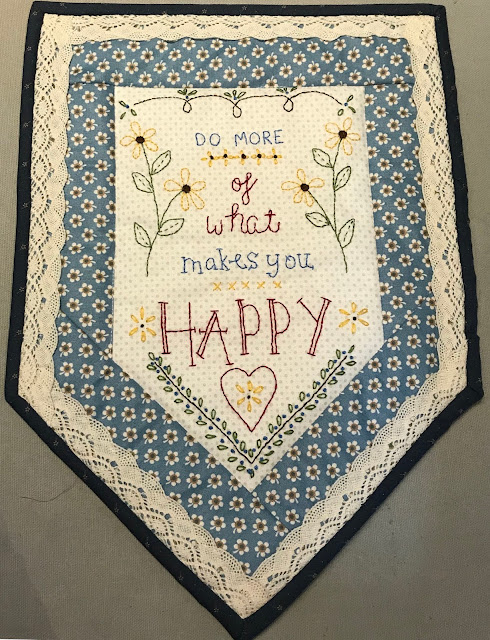 As a grand finale, a picture of the sunflowers in my backyard, courtesy of Melissa the Gardener. 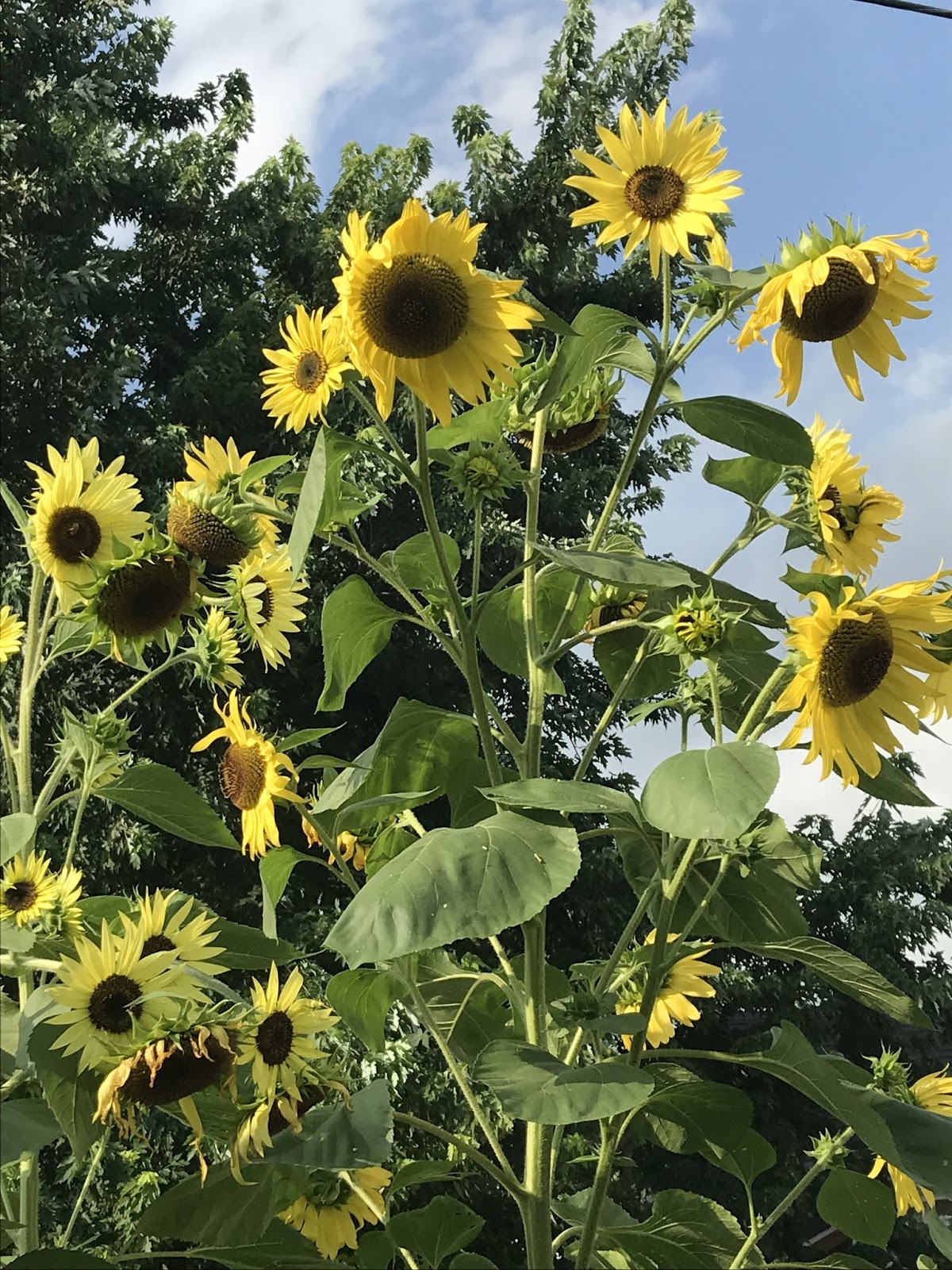 Last weekend we had our quilting retreat in Mascoutah.  It's always a favorite of mine.  For 3 days, I meet up with friends and we sew for as long or as short a time as we want.  It's fabulous!  I started a new quilt this time around.

Years ago, I tried to do the Farmer's Wife quilt using templates and it was a disaster.  My blocks didn't measure correctly in the end.  I was also COMPLETELY random in my fabric choices.  I got 3 or 4 in and lost all interest.  This time around I'm doing it in 30s reproductions and paper piecing.
I changed the color pattern on April and it looks nothing like it should.  It'll probably be a do over.  The lighting must have been terrible when I took these pics, the background is actually white.  Anne got yellow roses because that's my mom's name and she loved yellow roses.
They still don't measure correctly!  But, I think that's because of my printer and not necessarily because I suck.  That's my story and I'm sticking to it!
I've decided this quilt will be a tribute to my grandma, Nita Purdy.  She was a farmer's wife during the Great Depression with 10 surviving children.  Sadly, I barely knew her.  She died when I was very young (10?) and I only saw her during the summers growing up.  I was not the best behaved child.  My parents were divorced & no one was telling me no, except Grandma Purdy.  For this reason, I was terrified of her.  Now, as an adult, I realize where she was coming from and I wish I'd had an opportunity to know her better.  Or at all, really.  Who knows how far I'll get, or how long it will take.  I'm planning on it being my "retreat" project much like the Harry Potter bookshelf was. 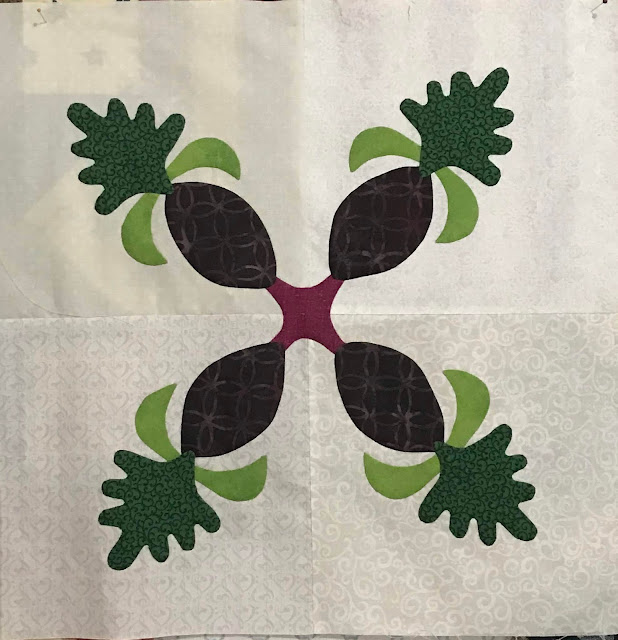 I also finished the Pineapple block on Barbara Brackman's Hospital sketches.  It was a quick and easy block and I was super pleased with my fabric choice for the pineapples.  It's the little things that make me the happiest!

Over the holiday, I did tons of crazy quilting but didn't get any pics, so I'll get back to you on that.  I was really on a roll, staying up to 3am.  You know when inspiration hits, you got to get it out before it floats away again.