Hello again, dear friends.  After being on layoff for 2 months, they've asked me to start back up tomorrow.  I really hope I remember how!  I thought I'd have another month before the tuxedo industry kicked back in but apparently not.  Before all this happened we had planned to replace the floor in my studio/ office.  Luckily, Rich had a long weekend and Hunter was able to come install my new floor ahead of schedule.  I knew scheduling it while I was using the room for my office was going to be a disaster.  This is my cutting/ ironing and painting station. 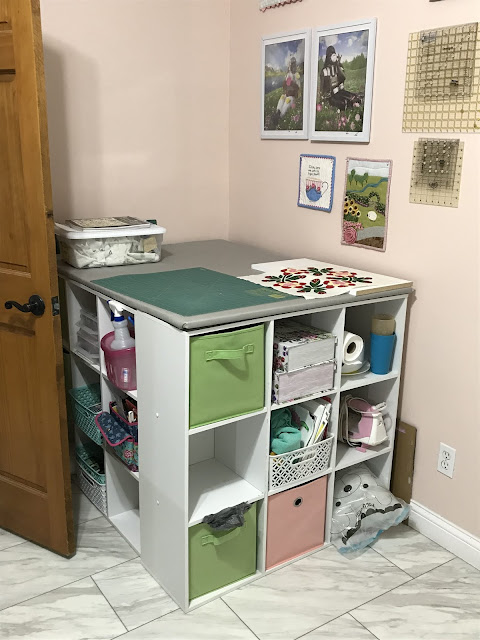 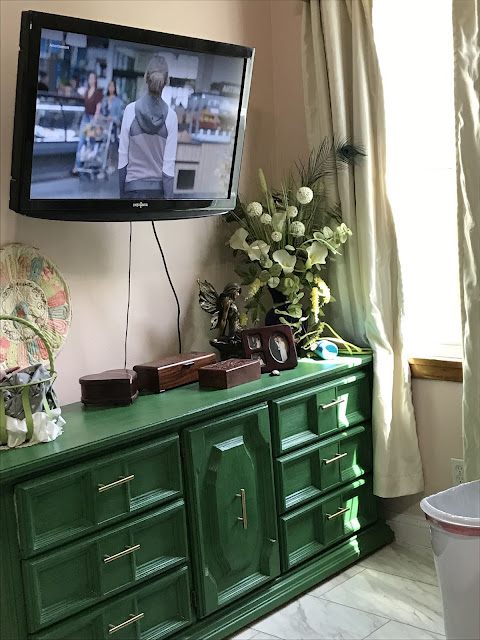 This was what was under the carpet all these years.  Ew.  The crazy thing is that they had this butting up to actual hardwood floors.  I bet it was spectacular when they also had the mirrored tiles on the walls... 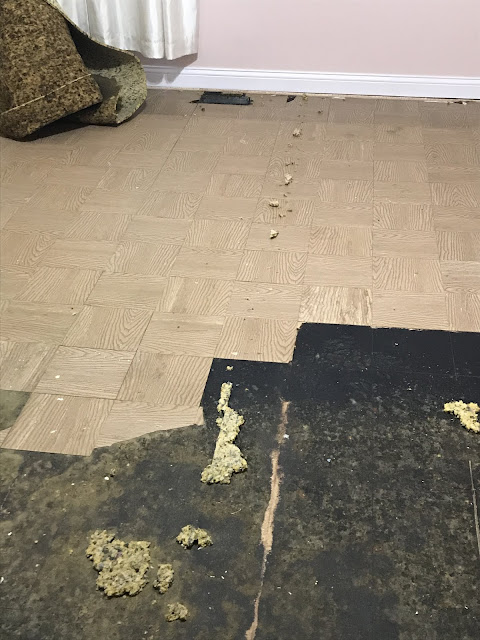 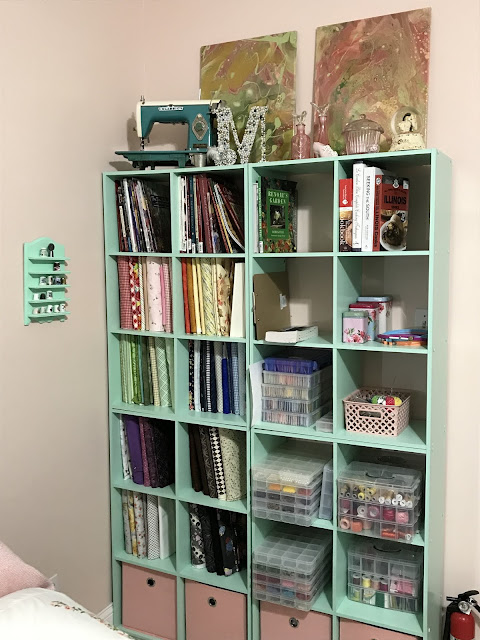 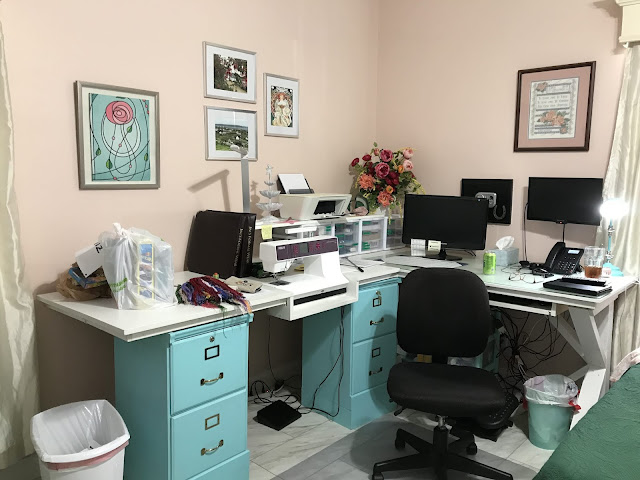 Truman's bed... he was so freaked out with the house being torn apart for the last few weeks that he's refusing to leave the bed now that it's all back together!  Honesty, Rich and Melissa are almost as freaked out.  Nobody likes change around here but me.  Rich is thrilled I'm going back to work, only because I won't have time to think of more house renovations. 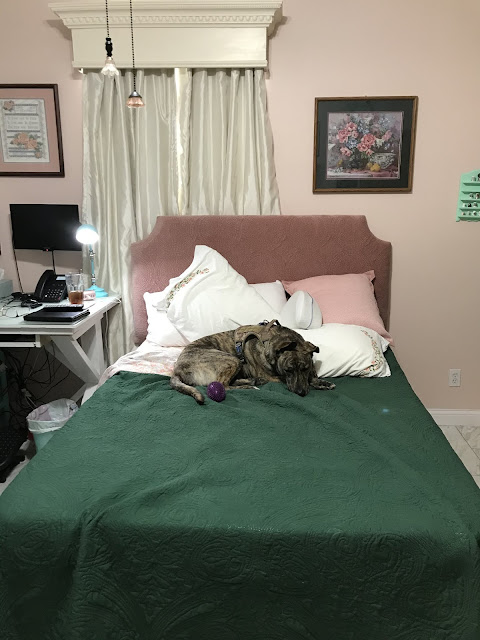 A good look at the floor.  It's a luxury vinyl plank.  I'd only been using this room for a week when I dumped BBQ pulled pork and chocolate cake onto the old carpet.  Here's hoping this is a little more Heather proof...  It was a HUGE job that took a solid 2 days but they did a great job!  I'm super happy to finally have the studio just the way I wanted it! 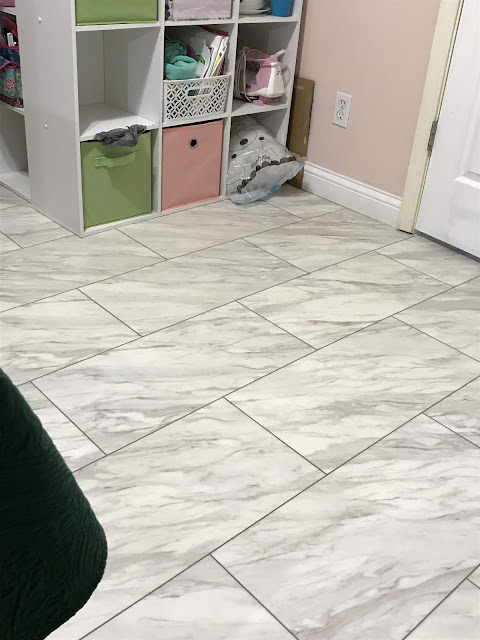 During the last month, I didn't do a whole lot of stitching since I was busy with the kitchen cabinets and then the floors.  I did start a Quilt of Valor that I've had in the kit bin for almost 10 years... 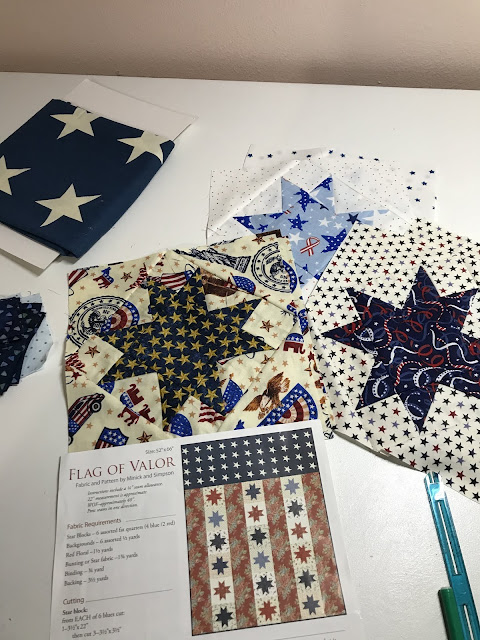 Last year, I bought these embroidered blocks at a quilt show.  The stitching on them is exquisite.  But, she stitched through the fabric and batting.  So, I have a quilt as you go situation.  I butted the blocks together and stitched them in place.  Pinned the border & batting together and attached it.  Then, instead of making an applique sashing, I decided to use rick rack.  Big mistake.  I've been stitching rick rack down for weeks... It'll be cute in the end but it's a lot more work than I planned on.  Literally, the story of my life... 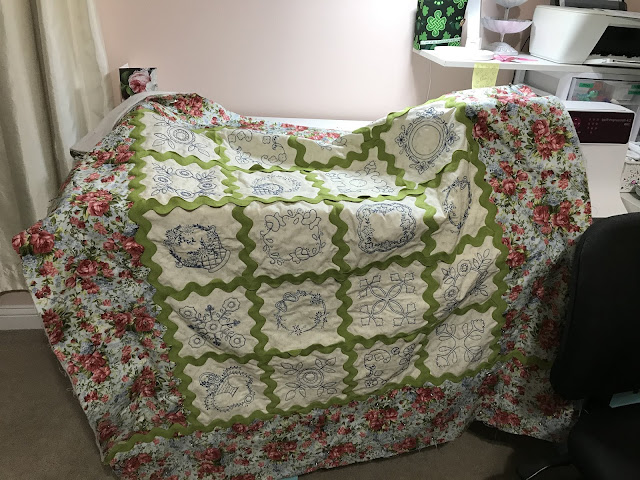 I did finally finish my Ireland crazy quilt book. 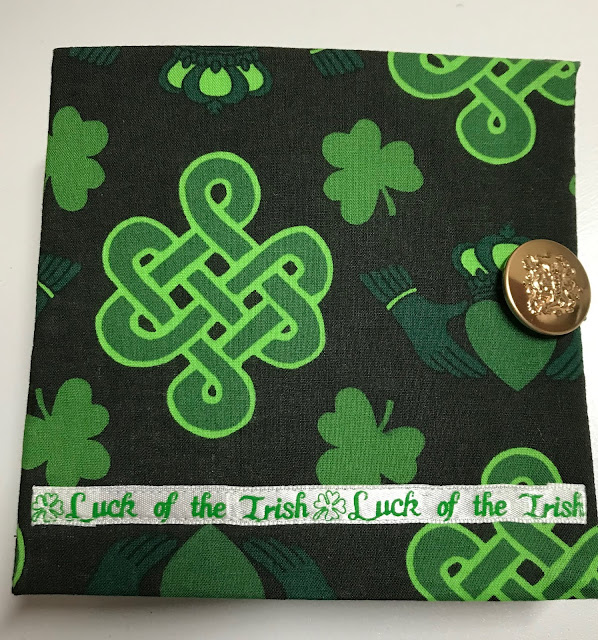 I was super gung ho on this in the beginning.  I thought I had plenty of ideas to fill the 5" blocks but as I went along, the ideas dried up. 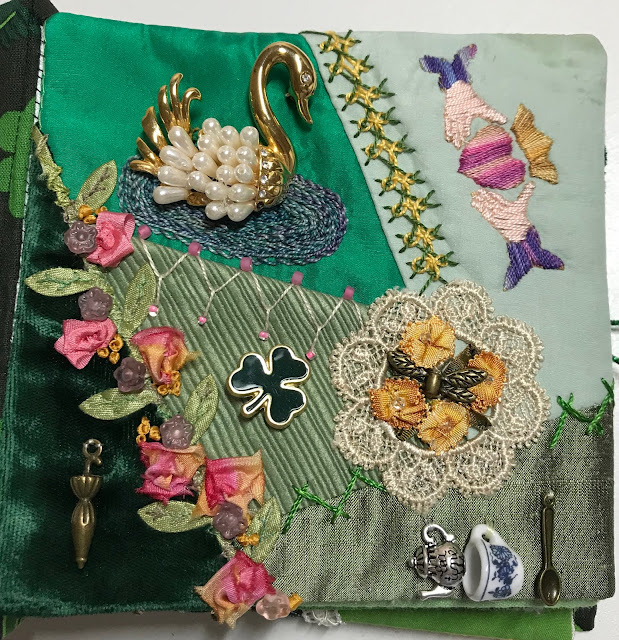 So, I went on to Etsy and bought a bunch of charms that reminded my of my trip.  I re-did the flowers on the block below.  I like the more mellow color scheme a lot better than what I had originally. 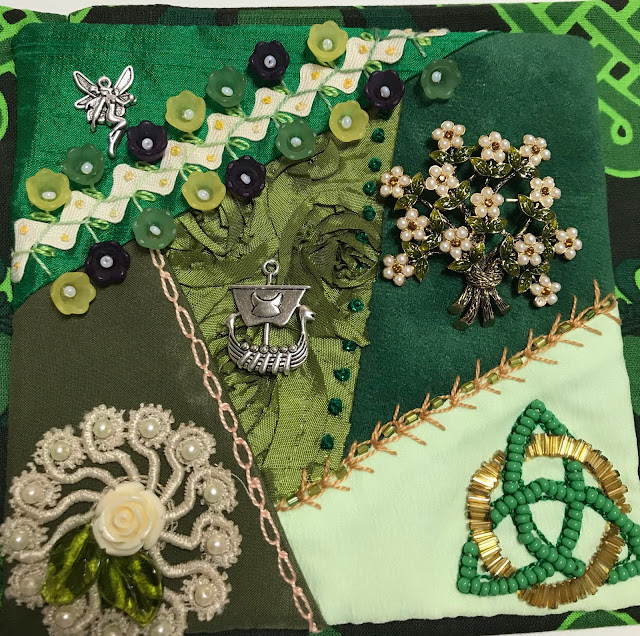 I don't think I made any changes to this one.  I liked it the first time out. 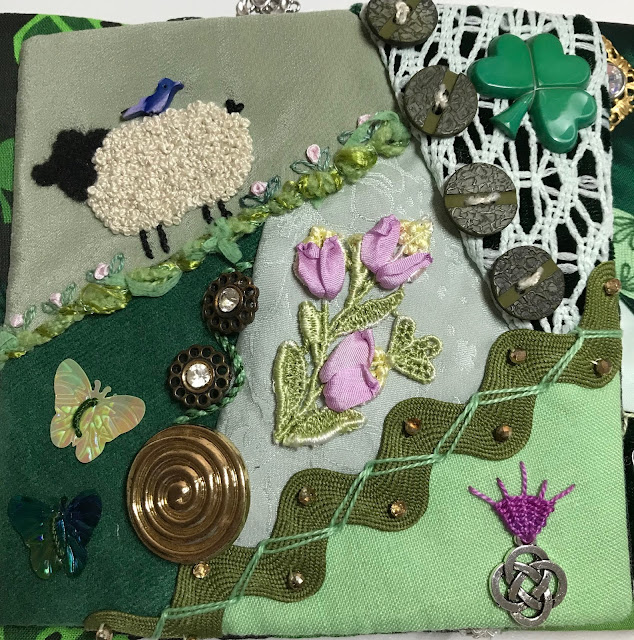 This is a re-do as well.  I changed out the clover button in the top left corner.  Rich had given it to me for our anniversary several years ago, I knew I'd get to use it some day.  The cross in the bottom left was my mom's.  I've been saving the tiny clover beads forever as well.  The rose is a broken piece of jewelry. 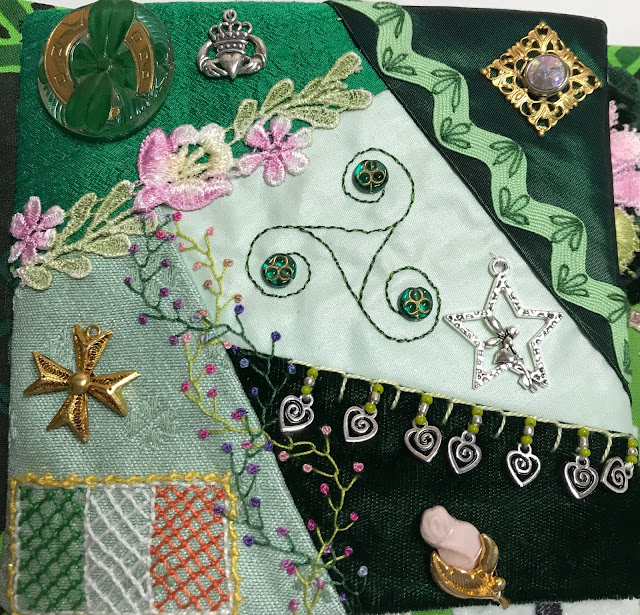 That fairy door opens up.  Now I need to find the right picture to put in there.  It turns out that the Ireland island was printed on both sides.  I made it dangly with the airplane, passport and rainbow. 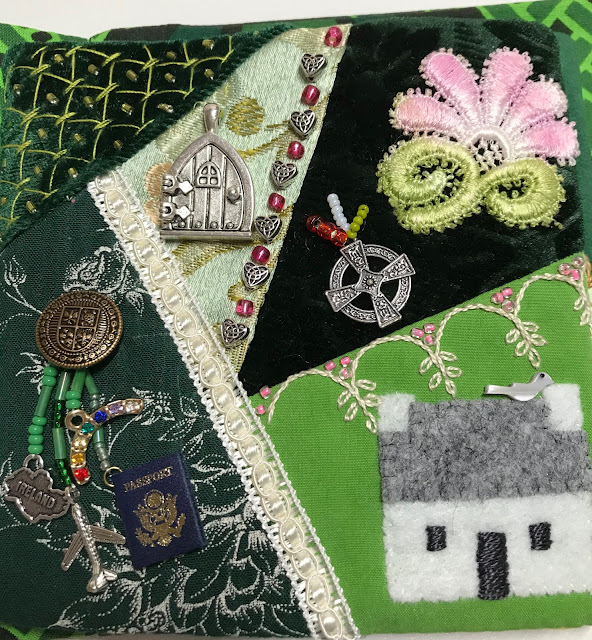 Other than that, I've still been working on Sue Spargo's Toned Down Sampler.  I'm about a week behind on that due to the renovations but I don't think I'll have too much trouble catching up.  Hope you're all safe and healthy!  Talk to you soon.
Posted by Heather at 1:47 PM 2 comments:

Is DIYing a Disease? Can It Be Treated?

Honestly, I'm DIYing my house to death.  Not to mention my hair...  Poor, unfortunate, Rich is exhausted from all the changes.  I made some strawberry jam a couple weeks ago and made a huge mess.  It set up well though and it doesn't always, so that was good.  Then I made something called Monkey Butter that tastes like baby food but the kids seem to like it.  The name intrigued me.  It's bananas, pineapple, & coconut.  It would make a decent cupcake filling.  IF ONLY I HAD A WORKING OVEN.... 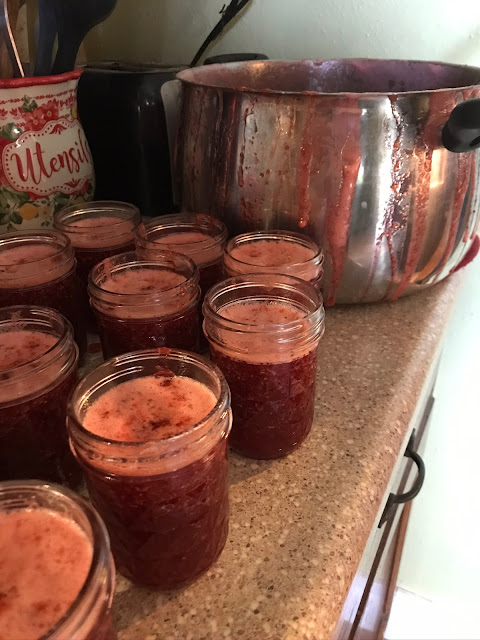 Digging through my stuff, I had a lot of strip fabric made.  Remember when that was popular?  It's been there for YEARS!  I had always intended to make Edyta Sitar's Coral Bells pattern.  Holy Y-seams, Batman.  I had enough pre-made strips to make 15 blocks before I ran out of off-white fabric.  Once I order more, I'll add alternating solid fabric blocks and a solid cream outer border so the flowers just kind of float around. 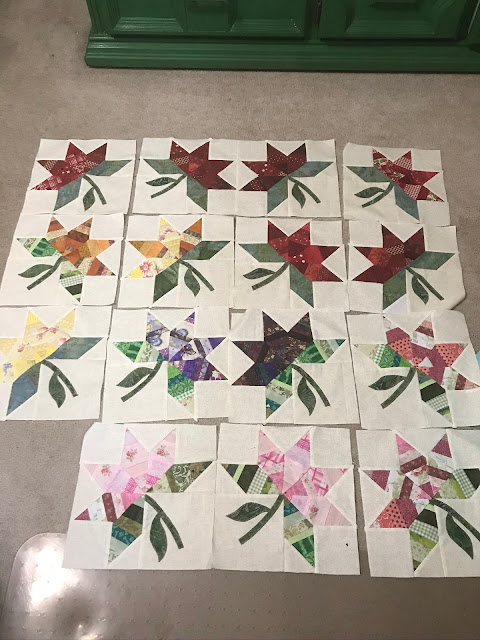 Then, I decided to start a red and green project.  This is from Jeana Kimball's book, Red and Green, An Applique Tradition.  Those cutout seeds were a real booger to do. 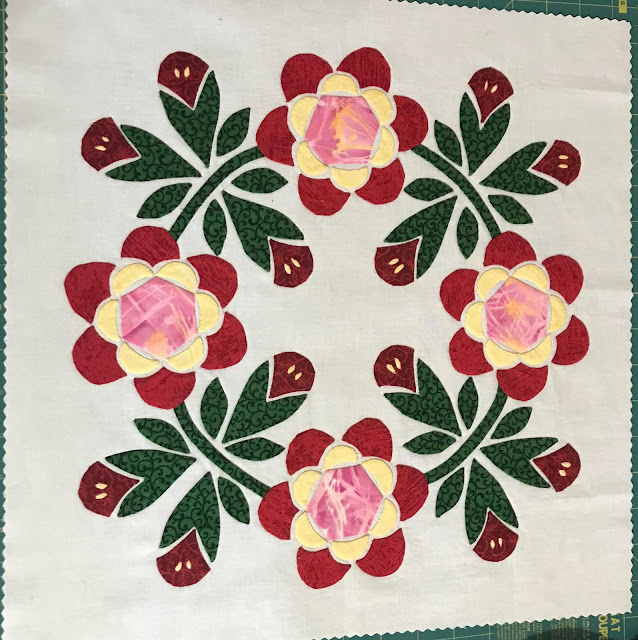 And, that's about when I decided to paint my kitchen cabinets.  I was washing them down and realized how terrible the oak looked after 17 years of Mantz torture.  Rich and I have disagreed about painting them white since we moved in.  So, we compromised by letting me get what I wanted. 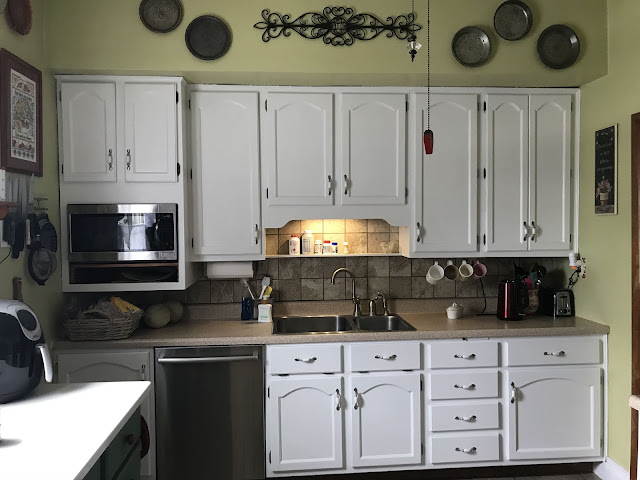 I think it looks great with the island that Hunter made for me last year.  Now, I'd like to change out the back splash and counter top to match the island better. 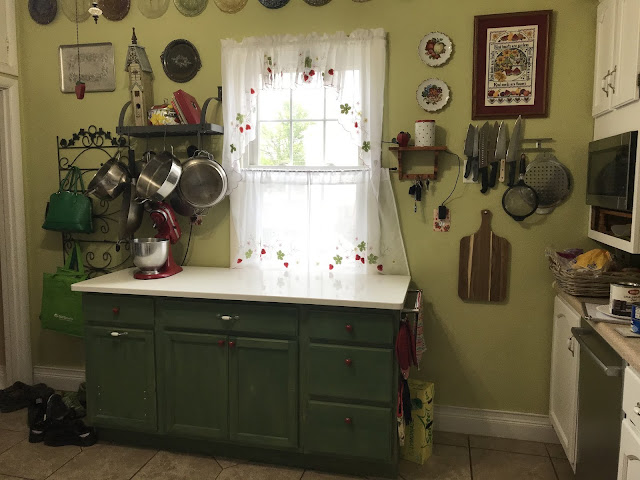 We also changed the light bulbs to "day light" bulbs and the brightness nearly blinded us after so many years in a cave!  It's also really crazy how the paint changed the acoustics in the room.  Last, but not least, I added chalkboard paint to the tall cupboard for lists and what not. 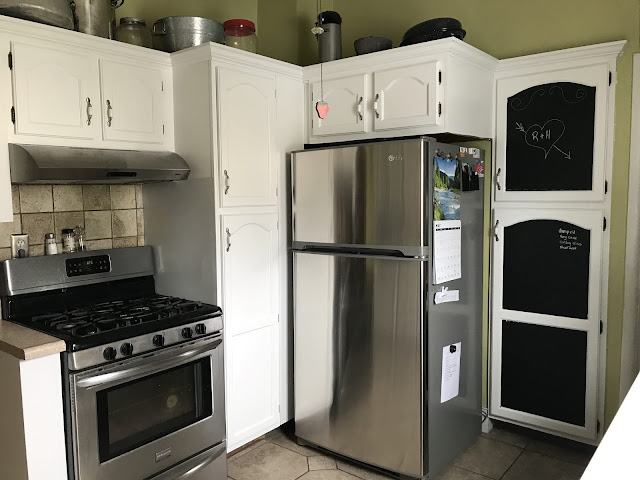 If I'd known how much work that was going to be, I would have hired it out.  I kept telling myself how much $$ I was saving by doing it myself.  Hunter and Carmen got an estimate for their kitchen cabinets at about $1200-$1500 and our kitchens are about the same size. My paint and supplies came in about $150.  But, I'm going to be 49 next week and I have literally spent the last 2 months sitting on the couch stitching and watching tv.  Let's just say, my fitness level does not meet the requirements of ladders, sanding, squats, and bending over to paint for 5 days straight in our nasty, moldy, basement during monsoon season.  I told Rich, it's the first and last time that I'll ever be glad to have a small kitchen.  With any luck, we'll be ordering a new stove next week.  I CAN NOT WAIT!!  I'm going through baking withdrawals like you wouldn't believe.  There's only so much you can do in an air fryer...
Posted by Heather at 7:11 PM 2 comments: