Man, these first 2 weeks flew by!  Between Christmas, New Year's and the mega flood, I kept a little busier than I prefer.

However, I didn't let little things like major holidays and Acts of God keep me from my stitching!  A girl has to have her priorities!  I kept my goals for the week of Christmas pretty light.  I managed to quilt and bind the baby quilt.  I did a really simple star meander.  I was out of spray adhesive and pinned it instead.  Big mistake.  I've got several puckers on the back.  Honestly, don't know how people have so much success with pinning!  I'm terrible!  Hopefully, the baby won't mind.  At least the front is super cute!

I also finished piecing Twisted Mystery 2011 but forgot to take pictures.  I'll try to include them next time.  I got to the end and found that I was missing the final instructions.  I emailed the designer but she hasn't gotten back to me.  Not sure if she will, so I may have to guess at the assembly instructions.  We'll see what happens. 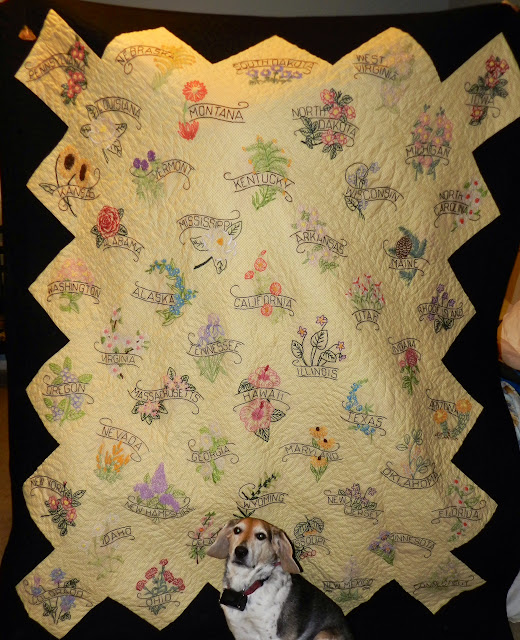 Fred was having his picture taken and I accidentally got a quilt in the background...

On the second week, I had a little more time.  I quilted & bound the State Flowers quilt.  I had my spray adhesive this time!  Not a pucker to be found!

There was a definite learning curve on this, however.  It was my first free-motion feather quilting.  I'm calling them "Heather Feathers".  Not quite right, but she had good intentions.  I used the seam as my spine.  Not bad.  Not great, but not bad.

I thought I'd taken a better picture of this.  It's my first CQJP block.  I waited until midnight New Year's Eve.  By the time I went to bed at 4:30am, I was totally delirious.  Delirious, but mostly done.

The bee and flower over here on the right really bother me.  I think I may have to re-do.  I think the rick-rack seam looks great.  Actually, I like everything else.  The flower is too bulky for the rest of the block and the bee is really "abstract".

Not to be forgotten, I also worked on my Art Nouveau quilt.  This is the first alternative block.  She's releasing more but so far, I've restrained from buying them.  We'll see if I cave or not.  This month's is a daffodil and SOO pretty!

I used binding clips to hold the fabric to the pattern for tracing this time.  It made all the difference!!!  Thanks, Pat K. for the tip!
These panels were such a pain in my rear!  I know if I'd had those binding clips when I did these, it would have been tons easier.  Making the seams line up was pretty awful because I'm so inaccurate all the time.  So, I fudged here and there and replaced a piece or two to make them line up.  Then, I found a picture of the new layout I'm using and realized I only need to make one.  Uggh!  Maybe the other can be a table runner?

Isn't it fantastic???!!!!  You can find it at Morning Glory Designs if you're interested in making one for yourself!

Goals for this week are quilting the Hey Cupcake quilt and possibly getting Roberta Anne with an "E" pieced.