How Many Things Can Go Wrong, Let Us Count The Ways...

Life unsupervised sucks so far.  I am wholly unprepared for the sheer volume of crap that I've had to deal with since January.

Let's start with the fact that I work from home.  First, Rich was always in and out needing my attention.  Yes, being an annoying distraction, but bringing a lot of fun to my day.  To be loved brings beauty to your life & gave me so much more purpose that I realized it did.  It's insane to me that all that is over.  Back to working from home, I've had to replace the modem and router because my internet connection was crap.  And, it's Prom Season and I'm working 60 hours a week with said modem/ router.  Being alone 95% of the time is probably not the healthiest thing I could be doing but it's where I'm at right now.  I went from Chrome Cast to Fire Stick because the TV wasn't able to stream anything.  All I wanted was to watch some GD Top Chef, is that too much to ask?!  That whole paragraph is a mess but I'm leaving it because, I too am a mess.

The garage: we had to hire an electrician to re-wire a thermostat that went haywire.  Then the pushbutton key pad died and locked me out of the garage.  After a small panic attack, I remembered to look in the jar of extra keys & found the correct key.  FYI: the key labeled "Garage" was not, in fact, the key to the garage...  Hunter had to reprogram the keypad to get it to work again once the battery was replaced.  Speaking of the key jar, I have figured out at least 50% of the keys in question.

We sold 5 of Rich's project cars/ trucks.  Only 1 of them ran, the rest had to be towed away by other crazy car guys.  We could not find one of the titles.  If he were alive, he'd argue that he gave it to me to file.  And, I'd argue that if that were true, it would have been where is was supposed to be.  The muffler and catalytic converter had to be replaced and the A/C fixed in my own car.

I mowed my first lawn.  Yep, I'm 50 years old and I had never mowed a lawn.  I couldn't get the mower started on my own because it was also a "project".  Ezra got it started but it was so heavy and hard to maneuver, I could barely use my arms the next couple days.  The mower has been replaced.

One of the bathroom sinks had a leak.  Hunter replaced the faucets and stopped the leak.

I accidentally programed my house thermostat to no longer recognize that I had a heater...

Having to switch bills into my name, figuring out who I owe & how much... is a nightmare.  SO MUCH paperwork.  Went to the bank & the manager made a joke about me coming into a lot of money... LOST MY SHIT.  Literally hysterical, couldn't drive myself home because I was having such a bad breakdown.  Then had to get back on the phone for work (was on my lunch break) and pretend that tuxedos actually matter and somebody's delayed shipment is important to me.

Earlier today, I got a notice from the IRS saying there was a mistake on my return and I owe more money.  Last week, I started getting the hospital bills.  Tonight's dilemma is a broken dryer.  If Rich were here, he'd get a new heating element or something & rig it to work another 20 years.  I'm pretty sure it came with us from CA.  Is this how expensive independence is?  Because it sucks.  I do not make enough money to shell out thousands of dollars on repairs/ equipment every month.

Okay, I think I'm done whining for now.  For those of you who stuck around for it, thanks.  For those who bailed on me, don't blame you a bit!  I hope everyone had a lovely Easter & is enjoying the spring.  Here's a picture of my wild bunch from Easter. 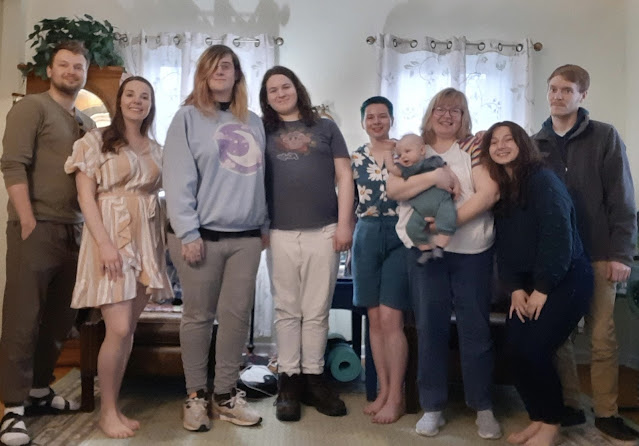