I'm falling behind on my Quilty Stitches.  This one is from several weeks ago.  I have one that I haven't started and then I think the newest gets posted tomorrow.  And, I believe there is only one left after that.  It's been fun but I'm always bored with a project by the end and I think I've hit that point with this one.  It may be because I chose to do the white filler, that's been fairly tedious.  Not to mention, I'm tired of doing half stitches. 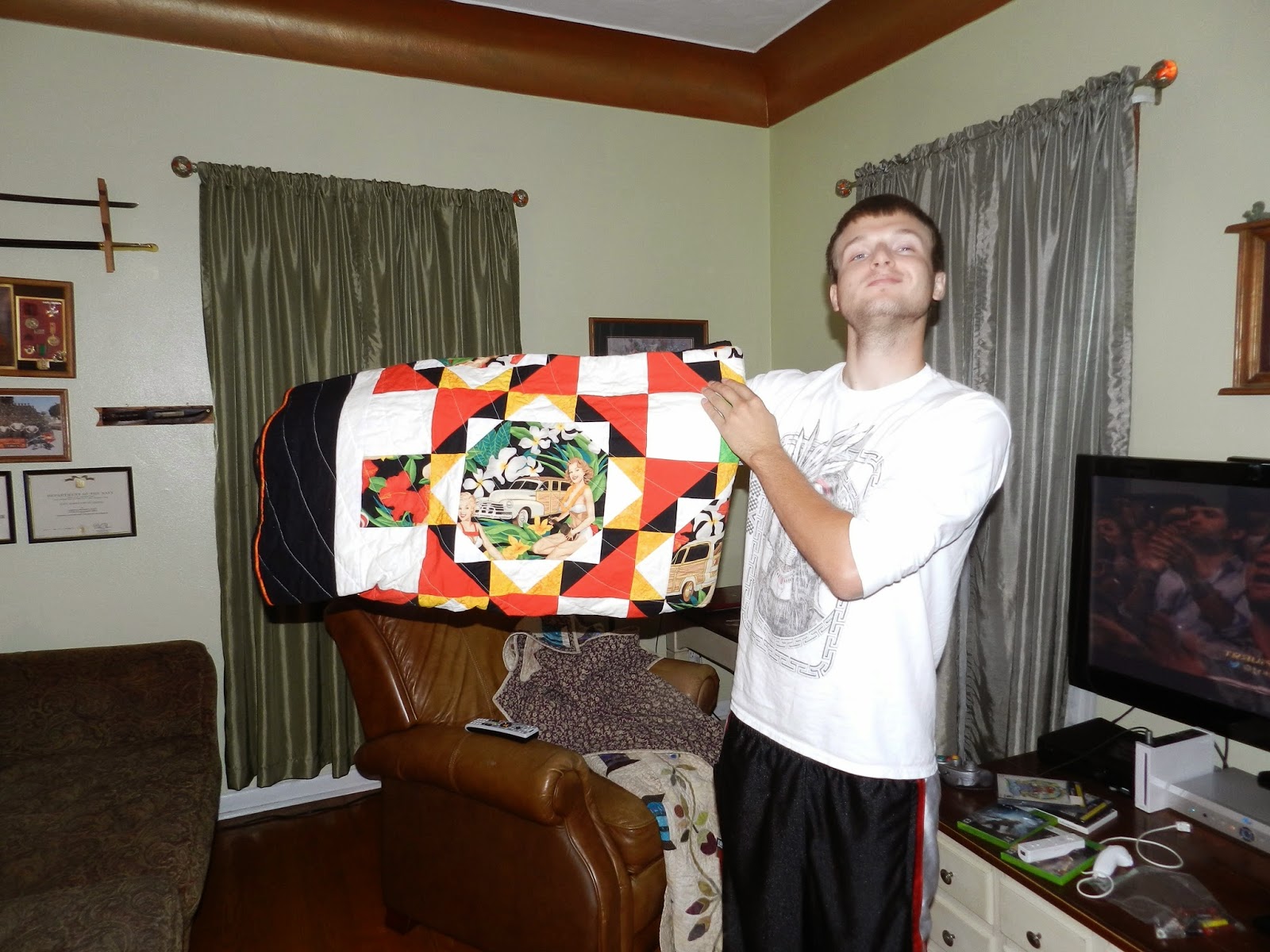 I was finally able to present Hunter with his graduation gift and only 2 years late.  He loved it.  I put a faux piping on the binding and then sewed it by machine.  I told him it was totally bad-assed and he pretended to be properly impressed.

Last weekend I went to a quilting retreat with some more friends.  I quilted this medallion quilt.  I meant to take a better picture of the actual quilting.  I did an all over orange peel pattern using my walking foot.  It turned out pretty well.  It was interesting enough that our guild president asked me to teach the technique at our Quilt Club meeting in October.

I completely broke retreat protocol by tring to be productive.  I'm new to retreats and didn't realize that no one goes to get things done.  They go to socialize.  If you happen to get something done, then good for you.  But, it's nobody's focus.  Now I know.  Come October, I'll be ready.  Looks like that'll be a busy month.

I worked on the 2 round robins that I had this month.  I'm so done with this, as well.  I don't like anything I've done.  It's really, really hard to work on things this far out in the process.  The one above was okay but not very interesting.  It's the square in a square round but I decided to do pinwheels in a square.

The yellow and blue one was three strips.  It was supposed to be basket weave but I think I would have had to make a second row to make it successful and I wasn't prepared to work on it any longer or buy any more fabric for it.

I also started a bag and worked on the applique baby quilt.  I didn't make much progress but I had a great time visiting with the ladies.  I'll post pictures of those later.

I'm so excited to find this fabric.  I've been looking for it for 10 years or so.  I've made pin-up quilts for Rich and his grandfather with cars.  Then Hunter got his with the Woody Wagons.  Now Rich's dad is going to get his with cowgirls.  Now to think of an interesting pattern to put them in before Christmas!