I'll tell you what, this has been a crazy busy week!  Thanksgiving will do that to anyone!

I thought I was done with the mermaid but I found these adorable fish beads and knew she needed them.  For some reason, my picture won't show... The lighting was so much better than before, go figure.  You'll just have to go with the tail shot for now, I guess.

Look how great my burning bush is!  We had tried a couple times to grow one over the years.  This one finally took and it's a slow grower but this year it was amazing!

We had Thanksgiving on Saturday because our schedules were so crazy this year.  Rich had to work
16 hours on Thursday & I worked Friday & Saturday morning.  Thursday was really weird for me because it was so quiet.  Rich did most of the cooking on Saturday.  That was another first for us.  I guess that's going to be my new normal now that the kids are getting older and will soon be off in different directions. 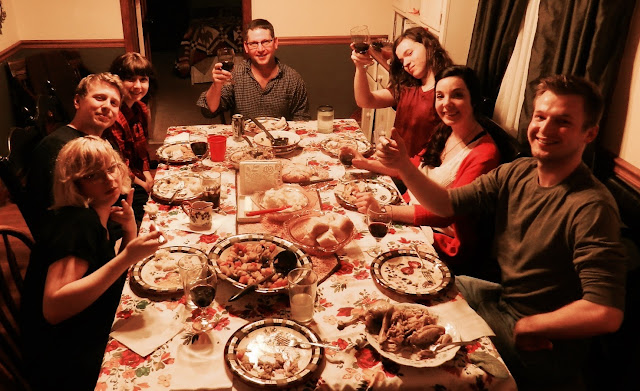 Most of the week was spent working on Grandpa's quilt.  It took a whole day to piece the alternate blocks and another whole day to set the blocks.  Damned if I didn't have to make 4 more Flying Geese blocks at the very end.  Too many, not enough.  I tell ya, it drives me crazy.

Last but not least, I made a few needle wallets to sell in my Etsy shop.  They're hand embroidered, using satin or velvet.  They're really elegant & I'm going to have a hard time parting with the hot pink one.  And, the black one with the clover.

I do love lavender.

Oh, but the clover on black velvet.  So pretty.  Bethany now wants me to embroider something on a black velvet dress for her.

Well, that wraps up another week.  After work tomorrow, I'll have to concentrate on quilting Grandpa's quilt.  Also, I found those 2 missing hexies... but now I have 2 of the same hexies going in the same flower. I think I've decided to not let it bother me.  That could change.

Hope your Thanksgiving was wonderful!  Now for some Christmas decorations!
Posted by Heather at 5:48 PM